From HORROR to HOPE 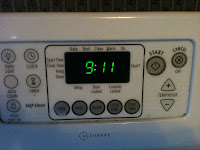 It began with the clocks. My son noticed that almost every day he happened to look up and check the time just as the digital display on his timepiece read 9:11. Sometimes he caught it both morning and night on the same day. The numbers followed him to his job in a clothing store, where his attention would be arrested upon handing a customer exactly $9.11 in change from the cash register. He’d be straightening the piles of size 9 jeans in the display case and suddenly note that the size 11 jeans were right above them.

Once he mentioned it to me, I began to have the same experience. It wasn’t long before I was texting him about the rump roast that went across the scanner at my register in the grocery store and rang up at nine dollars and eleven cents. Or I’d mention to him when I got home from work about the order that totaled $91.10 and likewise caught my eye.

After a while it became apparent that we weren’t the only ones who saw the numbers 9 and 11 everywhere we went. His friend had a similar experience with the clocks, always noting the time just when it was eleven minutes past the ninth hour. Even his brother mentioned an eerie experience at school in which two friends stopped by his desk to chat, both wearing football jerseys, the one on the left sporting the number 9 while the one on the right bore the number 11.

The truth is that people everywhere notice the numbers 9 and 11 together, and instantly their minds go back to the terror attacks of September 11, 2001, and the devastation that followed. I daresay never before has the numerical representation of a date in history been so etched in people’s memory that the mere reference of the two numbers together instantly causes our emotions to tumble towards despair and discouragement. Forces of evil in our world had a plan for destruction that they carried out that day. In the spiritual realm we likewise have an enemy that seeks to kill and destroy (John 10:10), and it’s not by chance that those numbers appear together before us so often, but rather his intention to continually remind us of fear and defeat.

Many people have experienced personal catastrophes that have nothing whatsoever to do with the events of September 11, 2001, but that have created devastation and havoc in their homes, hearts, and lives, just the same. And daily, they, too, are faced with inescapable reminders of that which they’ve lost. Perhaps it’s the facial features of a spouse lost to death or divorce that they see in the eyes and smiles of the children they had together. Maybe it’s the familiar landmarks in a neighborhood they still have to drive through but no longer live in due to job loss and financial collapse. Or it could be a certain curve in the road marked with a small, white cross that stamps a symbolic “9/11” across the day their world changed forever.

Nowhere, however, was the devil given dibs on the numbers 9 and 11. Perhaps God is looking to reclaim them, to instill in us the positive emotions of hope, peace and goodwill that are associated with them all through His Word. He, too, has plans for us, perhaps stated best in a signature 9/11 verse in the Bible, that found in Jeremiah 29:11, which reads, “‘For I know the plans I have for you,’ declares the Lord, ‘plans to prosper you and not to harm you, plans to give you hope and a future.’”

On a whim I started looking up the 9:11 verses in the Bible and found that hope, peace, provision and protection are associated with them throughout the Word of God. It’s in Genesis 9:11 that God promises never again to destroy the earth with a flood. Numbers 9:11 establishes the annual celebration of Passover, the day when God spared His people from death and delivered them out of slavery. The same verse in Nehemiah is a reference to when God parted the Red Sea for His people to pass through on their way to freedom, while provision and protection is promised to the widows and fatherless children in Jeremiah 49:11.

Never should we forget the lives lost on 9/11/01 and the sacrifice, courage and heroism of the first responders and those involved in later recovery efforts. But neither should we forget the sacrifice of Jesus on the cross, an action that defeated death forever and gave birth to the promises of good things to come that we find in the 9/11 verses of the New Testament (Matthew 7:9-11, 2 Corinthians 9:11, Hebrews 9:11 KJV, Revelation 19:11, ). His sacrifice is in vain if we let the devil steal away the joy and hope He purchased for us that day. May the 9/11s we see today instead inspire thoughts of a new beginning, a fresh start…a reminder of a glorious future rather than a destructive and depressing past.

It occurred to me recently that I use the 9/11 sightings in my life as an opportunity to connect with my son. God simply suggests we do the same with His.

“But [that appointed time came] when Christ (the Messiah) appeared as a High Priest of the better things that have come and are to come…” (Hebrews 9:11 AMP, emphasis mine)
Posted by Elaine L. Bridge at 2:51 AM