When a Sketch is a Stretch 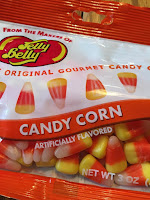 Dressing up in a costume to me is more torture than fun; best leave that to those who are young...in heart, if not in age. Because I spend the majority of the year trying to eliminate fear, I don't go looking for goblins and ghouls in haunted houses, nor watch movies that are sure to haunt my dreams and mess up a good night's sleep. I'm even too lazy to carve a face on a pumpkin. The only part of the holiday I really participate in is candy consumption... but that I do with a vengeance!

This year I tried to limit the caloric intake of the holiday and so reduced my actual holiday candy allotment to a single bag of candy corn. One bag containing two servings, that would be it. Dutifully I split the contents of the bag into two piles, eating one immediately, and somehow managing to put the other in a little container to eat as a treat at work the next day... except that I inexplicably forgot that I had the candy with me on the morrow and returned home with it still in my lunchbag.

I was sitting at the kitchen table the next morning, jump-starting my devotional time as usual with some thankful thoughts... at least three of them, one of which had to be illustrated in a little sketch in pencil in my journal. Originally my directive was to draw the moment which meant the most to me from the day before... but since my artistic skills are severely limited, some things for which I was profoundly grateful were eliminated from the selection process because I knew I could never sketch the moment in question. I'd have to be grateful for something a little easier to draw! Soon the purpose of giving thanks was lost in the ordeal I'd made of the activity, and I was coming close to abandoning it completely when I suddenly remembered that little container of candy corn.

Delighted, I grabbed it out of the bag on the counter and was ready to pop the small handful in my mouth, regardless of the early hour, when God halted me with a sudden “Not so fast!” that I heard in my spirit, if not in my ears. “One piece of candy corn for every grateful thought...no cheating!...and GO!”


I love it when God plays games with me, and so eagerly began. The thoughts came quickly at first, fueled by the little bits of sugary sweetness I gobbled after each one. I thanked Him for the re-connection with a friend I had seen the night before...traveling mercies in rush-hour freeway traffic I navigated to get to the event...the power nap I somehow had time for before leaving home that afternoon. After the first wave of gratitude there was still corn on the table, and my thoughts turned to things I normally wouldn't have mentioned... the sight of an owl flying through the trees in the yard just before dawn... watching a squirrel rebuild a nest with a mouthful of leaves it had collected from the ground below...a red-bellied woodpecker come to eat breakfast at the birdfeeder on the deck. Little moments I would have thought unworthy of my journal were gifts from God's hand whether I could illustrate them or not, and the acknowledgment of each brought delight first to His heart and then to my tongue.

Soon the pile of candy was gone but in its place was an understanding that God wants me to see His goodness in all things, and that walking in constant gratitude brings a sweetness to life that a little bit of candy can't begin to match. I've learned lately that even the scariest of seasons can be traversed with His constant love as my companion, and my steps sweetened with gratitude for bite after bite of the goodness of God. 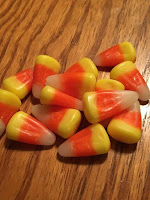