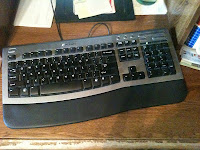 The pager beeped loudly in the middle of the night, causing my sleeping husband to stir in the bed beside me. Reaching slowly for his glasses and cell phone on the headboard of the bed, he was soon calling in to the office to find out what the trouble was. Minutes later he climbed out of bed and stumbled in the dark towards the computer. Mindful that his wife was hoping to fall back asleep, he kept the lights off and so didn’t see the half-full glass of Gatorade sitting on the desk. As he moved to switch on the monitor he accidentally knocked it over, dumping the contents directly on the keyboard in front of him. Then the lights came on in a hurry, and the mopping up and wiping down process began. When we had cleaned things up as best we could and he had finished the work required of him, we turned the keyboard upside down on some paper towels, hoping that any moisture left inside would drain out and not cause us any problems further down the road.

At first the keyboard seemed to have been unaffected by the ordeal it had been through. For two days after the disaster it worked perfectly. But suddenly on the third day some of the keys wouldn’t go down at all, or refused to come back up once depressed. I TRied toooooo send an email t my sister, but te sentences came oooout lking like this. It was a spell-check nightmare, to be sure. Initially I laughed, but after several minutes of struggling on in like manner I was soon so frustrated that I was ready to unplug the thing and simply toss it in the trash.

Thankfully my husband has more patience than I do. He pried off the keys that were not working properly and put them in a glass of water to soak. Then he wiped down the newly exposed interior as best he could and set it aside. When the individual keys were clean and dry he began to put the keyboard back together, piece by piece. A short time later we were able to type freely and easily on it once more.

The keyboard didn’t ask to be doused with a sports drink; it just happened. And many of the life experiences we struggle with likewise come upon us through no fault of our own. At first it may seem that we’ve come through the situation unscathed, but over time the damage to our faith and belief systems becomes apparent. Many still struggle on at this point, but gradually our unresolved hurts cause the message we are trying to convey to become garbled or lost entirely in its delivery. Our ministries then too hindered to be continued, we seem to be halted completely, not just in the work we’ve been called to, but likewise in our relationship with God. Friends, family and even sometimes we ourselves grow impatient with our inability to cope and continue on with our lives as they once were. We feel disgraced and discarded, and powerless to change a thing about our situation.

Some still plod on, despite their lack of effectiveness. Sadly, others turn away completely from the faith walk they once trod, never to return. And yet there are others who cry out to God for the help and healing they can’t find on their own, only to discover that He has been quietly waiting in the wings to provide both.

While recovery methods and times vary, often they involve a period of separation from the posts we once held, allowing us the time and freedom to soak in the Living Water of God’s Spirit while He wipes away our tears. Little by little He cleans us up and puts us back together, eventually restoring us completely to our positions of usefulness in His kingdom.

As it turned out, we brought our keyboard back to its place of purpose a little too quickly. Once again the space bar started to stick, so we again set the keyboard aside, temporarily replacing it with an older model until it received further cleaning and care. We likewise are warned not to rush God’s hand and our own healing processes, but to give both the freedom to do a complete work in us, trusting that God is able to not just restore us completely to our earlier ministries but to develop in us a greater compassion, insight and understanding toward others as a result of all we’ve been through.

Our individual “keyboard catastrophes” aren’t always the disasters we sometimes think them to be, but merely avenues to greater blessing and usefulness as tools in God’s hands to use as He chooses in the work of the Kingdom.
“And we know that all things work together for good to those who love God, to those who are called according to His purpose.”
(Romans 8:28 MKJV)
Posted by Elaine L. Bridge at 1:23 AM