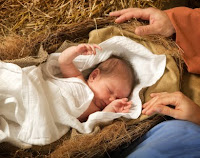 "It will be worth it when you see the baby at the end."

Such was the promise of the patient church worker who herded us through the seemingly endless turnings of a line that resembled something you'd see at an amusement park rather than at a Christmas nativity display. We'd stood outside in the cold wind for the first 45 minutes of our wait before at last reaching the warmth of the lit building. But as we gratefully crossed the threshold we were dismayed to find not yet the live scene we were looking for. Rather, we entered a roomful of people moving slowly down the length and breadth of the building in long lines that snaked towards the closed and guarded door at the far side of the room. Periodically that door would open and 35-40 lucky people would head into the display, leaving the rest of us to shuffle a little closer to the front each time.

This was not what we expected when we decided to attend the Bethlehem Experience, an annual production of the Eaton Church of the Brethren in Eaton, Ohio. We thought we'd arrive at the Preble County fairgrounds only to be plunged immediately into the streets of Bethlehem, hearing the Roman soldiers shout orders over the noise of the crowd. We were ready to be jostled by busy traders selling their wares on streets that were crowded with travelers who had come to sign the census and pay their taxes, while dodging live sheep and goats that ran between our feet. Standing in line for two hours was never a part of that plan.

"It will be worth it when you see the baby at the end." The usher's words echoed in my ears but didn't resonate in my heart. I waved at a woman I knew in the crowd, a teacher's aid at my son's school. Her ready laughter was strangely absent, however, and her smile somewhat forced. Her thoughts must surely have been running along the lines of my own, those being that even the most spectacular church production rarely merits a 2-hour wait before it begins.

At long last we reached the closed door. Our group of 35 was welcomed into another room where the church's pastor discussed with us briefly what we were about to see, encouraging us to talk to citizens we'd meet and ask them about what was happening in their city at this time. And then a Roman guard appeared and shouted at us to hurry along as we at long last entered the streets of Bethlehem.

Truly the church people did a wonderful job. The scenery and props were authentic, the costuming convincing, and the actors carefully schooled not to wear, do, or say anything that wasn't appropriate to the time period being represented. The city streets were littered with sawdust and still crowded as we, now fellow travelers, made our way through the town, pestered on every side by tradespeople trying to sell their goods. We stroked the pet goats penned in a corner of one Jewish home, as well as the donkeys and sheep corralled near another. The whole production was well done and very realistic, and we admired greatly the dedication and stamina of these ordinary people who gave up so much of their non-existent spare time during the busy holiday season to make the whole thing possible.

But just as I thought to myself that the experience was too short to make up for the long wait ahead of time, we rounded the last curve in the city street, …and there we saw Him. In a last cubbyhole, almost as an afterthought, sat a tired mother, a watchful father… and a newborn infant, perfect in every way, sound asleep on his stomach despite the noise and confusion in the streets just beyond, his tiny thumb stuck in his mouth. The sight literally took my breath away. I didn't want to move past. How I wished I'd brought my camera, only to hear God say that capturing that picture in my heart was all I needed to do to hold on to the moment forever. Truly that usher was right. The tiring wait beforehand was well worth it to see the long-awaited babe at the end.

Surely Mary must've felt that way all those many years ago. She'd endured the humiliation of her condition, the long months of pregnancy, the difficult journey followed by a long night of laboring alone in the dark as she gave birth. Surely it was worth it all to see the Babe at the end.

And what of the Wise Men who traveled so long and so far, following a star for months that slowly turned into years? Hadn't there been times when they longed to return to their loved ones at home, to give up the long days of travel in pursuit of this wandering light in the sky? When at last it came to rest over the unlikely birthplace of a king, didn't they feel privileged to finally lay their gifts at the feet of the young child they found there?

And what of us? We, too, grow weary in the waiting… tired of the obstacles we face as we, too, work our way towards the promise of a Heavenly Light. There are days when we wonder if it's all worth it. Sadly, some turn back before reaching Heaven's Gates and entering the City they've heard about for so long. Thankfully God puts people in our path who pat us on the back and encourage us with the words, "Hang on. It will be worth it when you see Jesus..."

They're right, you know. If a baby in a manger can take my breath away, I'll gladly give my life away to see the King of Glory on His throne and lay my treasure at His feet. My personal Bethlehem experience has taught me that the wait will be worth it in the end.

"After they had heard the king, they went on their way, and the star they had seen in the east went ahead of them until it stopped over the place where the child was. When they saw the star, they were overjoyed. On coming to the house, they saw the child with his mother Mary, and they bowed down and worshiped him. Then they opened their treasures and presented him with gifts of gold and of incense and of myrrh." (Matthew 2:9-11 NIV)
Posted by Elaine L. Bridge at 2:50 AM