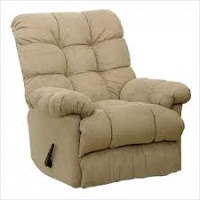 Baked by the afternoon sun streaming in through the living room window, my son temporarily closed his eyes to the football action on the TV screen, rolled over on the recliner and thought about taking a nap. The discomfort of lying on his stomach on the not-quite-flat sofa soon chased any thoughts of slumber from his mind. He opened his eyelids to find himself staring squarely at a very grimy and smudged living room wall. His disgusted comment, "This wall is a mess…" reached my ears in the kitchen where I was preparing the Sunday afternoon meal. Half in jest I reminded him of the message we'd heard preached in church just two weeks prior - that if God makes a need apparent to you, it then becomes your responsibility to take care of it.

Expecting him to laugh, roll back over and return to his game, I was therefore astonished when he instead came into the kitchen in search of a sponge with which to clean the wall! Quickly I placed the tools he needed in his hands and he returned to the living room and began to scrub. Soon he was the one who was amazed as he began to see the difference his actions made. Greasy fingerprints and dark smudges disappeared as he worked across the expanse. Encouraged by what he saw he reached up higher and bent down lower until he had washed down the entire wall. His mother bestowed praise on his efforts from the kitchen; his brother joked about again being able to see the color of the paint under all the dirt. And when he was done, the entire room was brightened physically as well as emotionally by his efforts.

And it was all brought about by a little repositioning… a change in the physical realm that felt awkward and uncomfortable but which caused him to see the world around him from a different viewpoint. Dirt on a wall that had been unnoticed by him for ages suddenly became visible to him. And yet it wasn't just the realization of a need but rather his determination to do something about it himself that made our living quarters a more pleasant place for the whole family to spend their time.

Oh, that we would catch this concept in the spiritual realm the way my son realized its truth in the physical one! God repositions us regularly in life, and we rebel at the discomfort of the situation instead of focusing our eyes on the everyday situations He wants us to see in a new way. When we do see a work that needs to be done we are more likely to wonder who's going to take care of the matter than to seriously consider handling it ourselves. We let inconsequential attitudes such as fear or pride keep us sitting firmly in the comfortable spots we've made for ourselves instead of following the urge to use the gifts God's placed within us and put them to work.

Fortunately there are those among us who are beginning to not just hear this message but to act upon it. How thrilling it was when one member of our congregation recently saw a microphone sitting unused on the platform and decided to fill it with song! Others are moving to fill an empty seat behind a drum set… teach a class that's been waiting for a teacher… type a bulletin in the absence of a church secretary or simply tidy a messy corner of the church that they happen to regularly walk by. Some are little actions; others require a greater expenditure of time and effort. Yet they all count the same in the sight of the God Who's placed these tasks before us and looks to see if we're willing to do what needs to be done.

We've sat in the Son and watched the work of the ministry go on from our seats of comfort on the sidelines for far too long. Our number's been called and the Coach is telling us it's time now to get our hands on the ball and get into the game.

"Do not merely listen to the word, and so deceive yourselves. Do what it says. Anyone who listens to the word but does not do what it says is like a man who looks at his face in a mirror and, after looking at himself, goes away and immediately forgets what he looks like. But the man who looks intently into the perfect law that gives freedom, and continues to do this, not forgetting what he has heard, but doing it - he will be blessed in what he does." (James 1:22-26 NIV)
Posted by Elaine L. Bridge at 11:59 PM