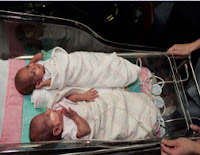 Her motherhood experience was a surprise from beginning to end. The first surprise came while she was lying on the examining table in the middle of her second ultrasound. Staring intently at the screen she saw something she hadn't seen in the first such procedure weeks earlier - a second baby! The technician was as surprised as she, and quickly checked the earlier results to make sure that the procedure had been done correctly and completely. Surprise turned into shock at the unexpected discovery, and then gradually dissipated into wonder and delight. She set about the task of nurturing her babies to the best of her ability for however long she'd be able to carry them.

The second surprise came in the form of labor pains that arrived in the 29th month of her pregnancy. Rushed to the hospital, her doctors worked to stop the birth process, hoping to give the babies more time in the womb. The best they could do was stall it for another week. On a cold and snowy Sunday morning in January, at only 30 weeks of age and weighing just over three pounds each, the twins made their arrival and were quickly rushed into intensive care.

The neo-natal center was not a surprise to this mother. She'd been through the worry and fear associated with this area of the hospital before, after the premature birth of her first daughter, almost exactly five years earlier. Familiar already with a routine foreign to most new parents, she resigned herself to weeks of daily commutes to the hospital to feed and connect with her twin daughters.

Those first several weeks of their lives were very different from what most mothers experience in the birth of their newborns, and so the method in which she mothered her children was likewise different as well. A new mom's day is normally filled with diaper changes, feedings and baby baths. Her days were filled with prayer. When incubators separated her babies from her touch, she touched God with her tears. Denied the opportunity to hold her children in her arms, she held God's attention with her pleas on their behalf.

Nightly before she left the hospital she would open the incubators one at a time, lay her hand on each tiny chest and ask God to do for her babies what she could not - to heal their heart murmurs, bolster their breathing abilities and soothe any digestive distress in their stomachs. She was neither shy nor quiet as she asked Him to hold them for her in the night, to cradle them in His love and rock them in His sheltering arms. When a doctor raised his eyebrows over her evening practice of prayer she looked him in the eye and said, "You have your job to do; I have mine. Your job is to treat them physically; mine, as their mother, is to pray."

Her words speak to all of us, whether our children are sleeping tonight in a hospital, are tucked safely in their beds at home or are on their own somewhere out in the world. As mothers we carry our kids in the womb for the first months of their lives and then on our hips for years after that. We carry dinner to the table, dirty laundry to the washing machine and groceries in from the car. Yet it's when we carry our children in prayer to the foot of the cross that we're most the mothers God created us to be.

“…The effectual fervent prayer of a righteous man availeth much.” (James 5:16 KJV)
Posted by Elaine L. Bridge at 3:06 AM