He Knows You By Name 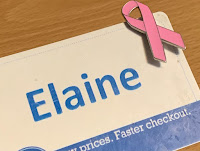 The woman stood in front of the self-scan booth unsteadily, eyes closed, and body swaying slightly as if it was trying to remain upright. She held a pie in her hand that she apparently was attempting to ring out.

“Can I help you?” I asked as I came up beside her.

“Oh.” Her eyes opened again, and she said, “I'm just trying to get my head together. I've got it.” Yet she stood there, rocking forward and back, pie still in hand, as if unable to process what to do next.

An older lady came up behind her with a loaded cart. Apparently they were shopping together; I assumed she was the first lady's mother. Together we helped the younger woman scan the pie, navigate her payment and bag the item. Then they turned to scan the cart full of groceries. It soon became apparent that the daughter was physically unable to proceed. She whispered something in her mother's ear, and headed out the door. Left alone, the older lady labored through the task of ringing up her groceries. Hooked to a tank that fed oxygen through her nose, which was also covered with the mandatory face mask, she struggled along until she finally pulled the latter down and gasped, “I can't. I just can't do this. She was supposed to help me, but she's been drinking. I thought I could do it myself, but I can't breathe. Could you please just cash out what I've done so far, and I'll go through a check-out lane for the rest?”

It was Easter weekend, and the checkout lines in the store were horrific; I assumed that was what prompted her to go through self-check in the first place. Sending her to go stand and wait in her oxygen-deprived state was unthinkable.

“I'll finish it for you,” I said, praying that none of the people at the other five booths I was responsible for would need assistance for the next few minutes. Quickly I worked through her remaining items, then put the bags back in the cart while she paid the bill.

“Thank you,” she said, and headed out to join her daughter. Relieved that we had made it through the episode unscathed, I put it out of my mind and went back to helping other patrons.

But moments later, she was back, still struggling while pushing the cart loaded with the bagged items. “I can't find my daughter. She was going to go sit in the van, but the van isn't where we parked it. People are telling me to call the police, but I don't want to call the police on her. I have to go look for her, but I can't push this cart while doing so. Can I just leave it here till I find her?”

“My name's Elaine,” she answered.

That stopped me short. My eyes bugged out a little as I showed her my name tag and said, “Mine, too!” With worries on her heart she had little time for seeming coincidences and hurried out the door. But I stood there a minute longer, knowing instantly that the seemingly random exchange was more than just that. Mine is not a common name. I knew it was spoken deliberately because it was meant to catch my attention. But duty called, and soon I was summoned by somebody else who needed help. I was likewise engaged with another customer when she came back in sometime later and retrieved her cart. I desperately wanted to know the end of the story, but apparently I had heard all I needed to hear. I pushed it aside and went back to work.

Sometime later I put the pieces together. My daughter-in-law works in an assisted living facility and had recently asked me if I had any stories I could let her use for an Easter devotional with her residents. “And if you don't have any, could you please write one for me?” she'd asked. I laughed at the last question, as I know from experience that I can't produce a story on my own. Inspiration has to come from above, and, to be honest, had been in short supply of late... a combination of earlier work hours that had taken away my usual writing time and the drifting of my mind in other directions as a result. Thankfully I was able to find a devotion written by somebody else to send her.

And then God gave me a story anyway... about how He sees us in our struggles with sin and sickness, and life issues...even just our own indifference to spiritual things, knowing that we are simply unable to get through life on our own. So He stands by, anxiously waiting for the fight to break us down till we finally speak the words He needs to hear before He can step in and act... simply, “I can't.” When we finally admit that we need more help than we can muster on our own, He steps in and offers what only He can do. He says 'I'll finish it for you...”... and He did so with His last breath on the cross. And now that gift of salvation is paid for and waiting for you to come and claim... because He carries your name across His heart.

“But God demonstrates His own love toward us, in that while we were still sinners, Christ died for us.”