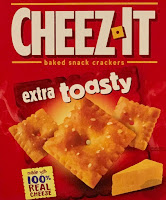 I stepped on the scale in the predawn hours of the day, looked down at the result, and sighed.

“I may have to give up Extra-toasty Cheez-Its for Lent.”

I smiled at the memory of my days as a practicing Catholic and the annual practice of giving up something for the 40 days before Easter as a reminder of the suffering of Christ on the Cross and His sacrifice on our behalf. Its purpose was to loosen one's hold on the things of this world and focus attention instead on its Savior. Clearly the scale was telling me I needed to loosen my hold on my box of crackers, and I always need more of Jesus in my sights. Lent is meant to be a serious and reflective season rather than a particularly happy one, but the “Fish on Friday” result of abstaining from eating meat on that day of the week during the Lenten season was always my favorite Catholic tradition and are three words I have lived by with delight to this day. Looking forward to a fish sandwich of baked cod in a toasted bun for dinner that night made it easy to push thoughts of cheesy crackers aside. Eagerly I signed on and hoped that on Easter morning when I again stepped on the scale I would see positive physical results as well as spiritual ones.

Somewhere in the multiple decades of my life my pursuit of God changed from following a list of rules to forming a real relationship with the Creator of the world Himself. Now my life is governed by my love for Him that grew out of the realization of His love for me, and my actions are guided and motivated by that love. One result of our ever-growing friendship is that He leads me along the path I am to follow with challenges that are fun and motivational, rather than difficult or restrictive. He was fine with my “giving up” something that was cluttering my life and expanding my waistline, but suggested I put my focus on “giving out” every day of the period as well. I was to try to find ways to show His love every day in some way.

Perhaps it was not by accident that I was reading Max Lucado's book Begin Again at this same time, and that I came across his assertion that “the works of mercy are simple deeds.” God wasn't looking for me to pull off some grand feat of bravery or large monetary expense to prove my devotion so much as to simply put others before myself in some way as an offering of love. It's a devotion to small acts or kindness that are heroic in God's eyes and garner His attention.

In the hours that followed that day He gave me some examples. I was manning the self-scan booths at my grocery store when a lady signaled to me that she was ninety-three cents short on her bill and was going to run to her car to gather up some loose change. The man who was putting cash in the machine next to hers simply pulled a dollar bill out of his already open wallet and handed it to her with a smile. Another time later in the day I noticed that movement out the front door was slow because people were inviting others to exit ahead of them with a smile and a wave of the arm instead of shoving their way through in the usual hurry to get out and on with the day. There were others who stopped to help pick up items dropped by somebody else, unload a cart, or simply wait patiently with a smile when somebody in the line ahead of them required a little bit of extra time; all simple examples of actions that God sees and takes note of.

In his book, Max asserts that eventually each one of those actions will be recounted, remembered, and rewarded. So he encourages us to make a list while on earth that will take some time to get through in Heaven. No worries; you've got all eternity with Him to review what you did with the life and breath and love He gave you.

I like my Cheez-Its extra-toasty. But I love that God can use even the description on a box of crackers to challenge me to give a little extra to a world that needs the Love I tend to hold all to myself. How great to stand in heaven with empty hands because my heart was full and I gave all His Love away.

“And the King will answer and say to them, 'Assuredly, I say to you, inasmuch as you did it to one of the least of these My brethren, you did it to Me.'”