Hands-on Help for the Hurting 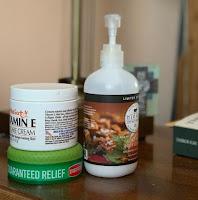 My fingers were all just so sore.

That was my thought as I lay down in bed the other night. Usually I have one or two troublesome digits at a time during the winter months; to have both hands so achy was unusual and a little overwhelming. I could work around a couple of sore spots with ease, but to have the fingers that were supposed to pick up the slack also in bad shape was a bit of a problem. Resolutely I grabbed the little pot of cream on my bedside table, took off the lid and sent the top of both hands inside for a dive. Then slowly and methodically the tips of those ten fingers worked that salve into each other's broken places... the finger cracks by the nails from the cold weather, the dry skin from pulling moisture-sucking grocery bags open all day at work, the burns from my carelessness with the wood stove. Up and down, in and around, rubbing and soothing till all the excess was gone. I got tickled to realize that as each finger worked cream into its neighbors' wounds, its buddies beside it were doing the same to its own lesions. It was a mutually beneficial action that would soon bring positive results. I flipped off the light and let the healing balm do its work during the sleep-filled hours of the night.

When I woke I realized that my fingers' actions the night before were a picture of the church.

“Church” has been on my mind of late, as my pastor has been preaching a sermon series exploring the reasons why we as believers attend. Of course, church attendance has changed in form during this last year of dealing with a pandemic; our options have expanded from merely walking through an open door to watching a service online to small-group Zoom meetings in the comfort of our homes, to name a few. But a weekly gathering of believers in some form is still a ritual we cling to. My pastor's opening question of why we do so troubled me more than I liked to admit. Was it just a matter of habit? One of those things I've done for so long that the action is no longer questioned? Or perhaps obedience? I went originally because my parents said so; now I go because God says the same? Or is it merely a social activity with people who have become my friends? The question lingered in my subconscious and surfaced repeatedly during the last couple of weeks to tease my mind.

In the process of delivering last week's sermon, almost as a side note, our preacher issued an invitation to his congregation. The ongoing construction of a new sanctuary on the church grounds is nearing completion, and church members were invited to come in socially-distanced times and ways to cover the bare floor with hand-written Scriptures and prayers before the carpeting was laid down in the coming week.

I smiled at a memory the words conjured up; a similar invitation issued many years ago when the church I was then attending had built a new platform for its growing worship team, and we likewise covered the bare wooden boards with the words and promises of God. It was a powerful and prophetic action that united us in purpose and praise for what God was allowing to be a part of in the lives of the people in that area. I was eager to participate again.

I had driven by that old church in recent weeks, and was saddened by the sight of the chain that now blocks the driveway, the building slowly falling into disrepair behind it after property disputes among former tenants forced it to close while lengthy legal battles sorted the mess out. To a casual observer it looks like the church is shut down, its days of serving the community now over. But those of us who used to attend there know differently. The building may be closed, but the church itself is alive and well, the flame of the Spirit that used to dwell there burning brightly still in the hearts of the believers who are now spread out into different houses of worship, setting dry spirits aflame with new hope wherever they go.

And suddenly I understood. The church gathering is just the pot of cream we dip our hearts into each week, a source of healing balm that we then use in our interactions with each other, rubbing it into our sore spots and open wounds...it is help for the hurting that we apply as we go and which heals our own hurts in the process. We come together for a joint encounter with God, Who promises that where two or three are gathered together in His Name, He is there in their midst. The worship releases and increases our love for Him, the preaching instructs and inspires us, and the social interactions give us an outlet for the gifts we've been given... so that we leave armed and ready to be a blessing in some way to those who will cross our paths. Just as I have three kinds of lotion or ointment on my nightstand that I choose between on any given night to give my fingers some relief, so do we have multiple options of church services to choose between depending on our personal preferences and needs. The important thing is that we find a source of help.

Perhaps when God warns us not to forsake “the assembling of ourselves together” (Hebrews 10:25), it's not because He wants to add another item to our over-loaded to-do lists, or to make us feel guilty for our failure in that area, nor because He is an overbearing father just giving commands because He is the Boss. He simply knows that none of us can make it through this life on our own... that we need each other to sooth the hurts and walk us through the broken places in our lives in this journey through a wounded and weary world. As always, He has a source of Help and Hope ready for our every need if we just make the effort to avail ourselves of it.

Why then is there no healing for the wound of my people?”