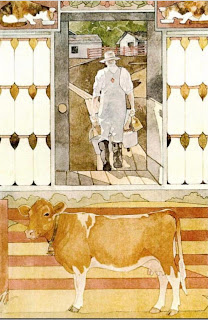 Not many girls I knew were lucky enough to grow up in the shadow of a big city and yet have a working dairy farm situated at the end of their road. I never really paid much attention to it until the day I spotted a cow giving birth in a pasture while my family was driving by. Thinking such a momentous event should not be happening unattended, I made my mom stop at the house, raced to and pounded on the door, telling the farmer who answered what I'd seen in breathless gasps that he was surely lucky to understand. He smiled kindly, nodded his head and thanked me, and said he'd take care of it. Then he closed the door and we were done! His response was a little underwhelming, to say the least, but thus began a friendship that lasted for several years.

Apparently I was just one of a number of local children he humored with trips about his farm, letting us tag along as he did his chores, scattering grain for the chickens, feeding the big bull in the barn, and to my great delight, hand-feeding the calves out of giant baby bottles that they sucked at so greedily they threatened to pull them out of my hands.

And always I visited the milking barn, passing the cows in the corral, patiently lined up and waiting their turn to be milked. While most were milked by machines attached to their udders while they fed on hay in the bin, there were some Mr. Peak milked by hand for some reason, sitting on the little three-legged stool and working the udders to produce a steady stream of milk in the waiting bucket below. He gave me a shot at it a couple of times and I remember the softness of the udder, the process of working the teat and my amazement when my efforts were successful. It was magical to a city girl, and I spent countless hours there on lazy summer afternoons.

The farm is long gone now. A Silicon Valley millionaire bought the property and built a mansion on that land of milk and memories. But I was suddenly transported back there recently in a conversation with my sister in which we discussed the importance of “milking joy” out of every moment this holiday season, especially in a year dominated by the worries and struggles produced by a global pandemic. Suddenly I was back on that milking stool, squeezing the nipple, delighting in the milk my actions produced.

God wants us to know we can have that joy in everything we experience, not just during the holidays, but every day in every circumstance we face, if we just take the time to work our situation to produce the blessing it contains. Time stops and joy deepens when we stop long enough to squeeze out all the magic of the moment, appreciating it fully and giving thanks for the wonder of it before releasing it, only to grab the next and repeat the process, again and again as we go through our days. Even the hard times have hidden blessings that are found only when we make the concerted effort to pull up a stool and release them.

Too often these days in our increasing rush to meet holiday deadlines, our joy is produced through artificial means, pumped out of the season in the familiarity of carols, heartwarming movies, eye-popping decorations and wallet-emptying purchases for ourselves or others. We get our spiritual sustenance in the same way, bottled and delivered by any number of outside means. One benefit of milking machines is the incredible amount of time they save on days when multi-tasking is by necessity the name of the game. But there is something special about setting aside some time every day to milk joy the old-fashioned way, spending the time to bond with the One who gives us all good things and finding our peace in the meditative process of seeking Him out.

Our day starts every morning like a cow standing before us with a full udder, ready to release it's joy. Don't let your bucket run dry.

“Through the Lord's mercies we are not consumed, because His compassions fail not. They are new every morning; Great is Your faithfulness. 'The Lord is my portion,' says my soul, 'Therefore I hope in Him!' The Lord is good to those who wait for Him, to the soul who seeks Him.”