Rainbows are for Real 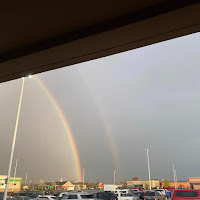 It was my daughter-in-law Sarah who suggested it. Realizing we were coming up on my husband's birthday a year-and-a-half after his death, she thought it would be fun to remember him by dressing in support of his favorite baseball team and going out to eat his favorite food. The men in the family were all busy with another activity that night; it was up to us girls to celebrate on our own. We donned our best Cincinnati Reds baseball gear and were in the car driving to a nearby barbecue joint, when I suddenly noticed the look of the sky. It had been on and off cloudy all day, but a just-passed thunderstorm left dark clouds in front of us but sunshine now spilling all around us.

“It's a rainbow sky!”, I said with some excitement, noting that conditions were just right at that moment for the appearance of a beautiful bow. “Everybody keep an eye out for rainbows, and holler if you see one!” Just as I said that, I looked to my left and spotted a multi-colored arch outside my driver's side window! “THERE'S ONE!” I fairly shouted, and we all ooh-ed and aah-ed over it as we drove. A minute later it was suddenly gone with the shifting light and cloud formations, and we talked about how easy it is to miss them completely. Almost to the restaurant, though, we suddenly saw another. “Two in one day!” I exulted. “That's amazing!” We got to the restaurant and were enjoying our meal together, when suddenly a customer at another table spotted yet another rainbow out the front windows of the building. It was so pretty, bold and distinct, that dinner patrons left their tables and headed outside to take a picture of it. My granddaughter Chloe was sent to do the same. There was even a fainter secondary rainbow outside the first, making this third vision the most extraordinary yet.

Three in one day! My heart overflowed and a smile split my face every time I thought about it. And yet I still didn't get it...until while again marveling over the sightings on our way home, Sarah said, “You know, that was Jim... saying hi.” Suddenly it hit me. Of course that's what it was! And then I burst out laughing at the thought of how frustrated my husband would be at having to send THREE rainbows before we got the message! I could just picture him seated next to the Almighty and saying helplessly, “They're just not getting it, God! We're running out of daylight here! What are we going to do?” And so they sent the double whammy, hoping we'd finally get the point. And when we did, the laughter... so like my husband to always leave me with a smile on my face and a laugh in my heart.

Jim didn't send any more rainbows that day... he didn't need to; we finally got the message. But God simply never stops... and I wonder if He doesn't likewise get a little frustrated when we repeatedly miss the messages of His love that He lays before us in a million different ways as we go about our days. He placed the first bow in the sky as an act of love and a promise that He would never again let floods destroy us. No wonder on stormy days in life we still lift our eyes to the skies and look for a sign of His presence and His love. Rainbow skies just mean that God's eyes are on you... you are loved more than you can imagine, and safe in the shelter of His grace.

“I have set my rainbow in the clouds, and it will be the sign of the covenant between me and the earth...Never again will the waters become a flood to destroy all life.”