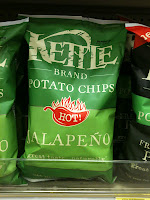 David may have downed his giant with a single stone, but God felled my foe with a potato chip, of all things. A potato chip!

I met him several years ago, shortly after I began working at the grocery store. As happens with regular customers, I saw this man so often that he gradually became another in a string of nameless friends who bring a smile and a moment of cheer as they pass through my check-out line on any given day. What made him different…and difficult…was his conversation.

Early on in our acquaintance it became apparent that with his boys grown and his marriage over, he was giving himself wholeheartedly to the pursuit of the happiness to be found in a case of beer, a willing woman, or a fast dash on his motorcycle, preferably with one such woman perched on the seat behind him. A road construction worker by day, he partied hard by night, his perpetual tan and easy smile a testament to his devotion to a life of fun in the sun.

His language reflected his lifestyle, laced as it was with raw humor and sexual innuendo. He could turn the most innocent of casual comments into something entirely other than what was intended, and he did so regularly with great delight at my subsequent confusion and embarrassment. Most of the time I was able to just laugh him off, change the subject and then wave him on his way, and so our friendship of sorts continued. But there came a day when everything I said was taken the wrong way, making it absolutely impossible to converse with him. I’d had it, and told him so, requesting that he just pick another checkout lane to go through in the future, because trying to talk with him just wasn’t worth my time and trouble any longer. Store policy aside, I’d reached the end of the line with this particular shopper in mine.

He was surprised, to say the least, but kept his distance for awhile. Eventually he apologized and asked if we could start over, and for awhile, things were better. He was careful about his subject matter, keeping his conversation to safe topics like the tomatoes growing in his garden, or, as the seasons changed, the possibility of joining a gym to ease his boredom during his winter work layoff. But like a leopard that can’t change its spots, soon he was talking about the great scenery to be found in his workout sessions, and toned muscles other than his own. I shook my head at his consistency and he laughed as he headed out the door.

With road construction in full swing during these summer months, his visits to the grocery store have been fewer, but a day or two ago he came in for a cold drink and I spotted him already smiling in anticipation of his sport at my expense as he headed my way. But by the time he got to my register he was coughing, clearing his throat repeatedly, and could barely talk. Apparently he had grabbed a handful of the potato chips offered in the free sample bin as he came in the door, tossing them into his mouth without giving the action a second thought. I’d passed the display on my way in, as well, but having noted the word jalapeno splashed in bold lettering across the front of the sample bag, this potato chip devotee had given that particular flavor a wide berth.

My shopping friend now wished he’d done the same. “Wow, those chips are hot!” he sputtered, gasping for air and wiping his watering eyes. With conversation nearly impossible because of his continued coughing fits, he did manage to spit out, “Ill bet you’re enjoying this!” Naturally I wouldn’t wish his misery on anybody, and I knew he’d be fine once he took a slug of the drink he’d just purchased. So I felt free to enjoy the fact that our roles were finally reversed; this time it was he who was red-faced and speechless while I was the one with the smile on my face.

“You have to admit, it‘s kind of funny,” I giggled.

“You probably planned it,” he muttered as he stuffed his change in his pocket and headed out the door.

Thinking to myself as I watched him leave that I couldn’t possibly have come up with anything so perfect, I was more struck by the fact that I didn‘t have to - that God did it for me. Having long ago struck the word coincidence from my vocabulary, I was encouraged by this simple reminder that He knows every detail of what goes on in my life and that He willingly fights my battles for me, even those that matter so little in the grand scheme of things. But as always, there was more to the moment than just that. He took me back to an earlier thought, reminding me again that a leopard can’t change his spots…and we can’t do it for him. But that doesn’t seem to keep us from trying.

All of us have “spotted” people in our lives, those whose bad habits and subsequent difficult behavior we’d love to change. And God would remind us that only He who created the leopard in the first place can remove its markings. In fact, that’s what occupies His time as he creates for Himself a Bride “without spot or blemish”. He simply is at work in each of us, making us into what He would have us to be. Our desire that He hurry up and “git ‘er done” affects Him not in the least, and we must be patient with His pace, realizing that  as much as He’s working in that “problem” person, He’s likewise at work in each of us.

We have blemishes, too, problem areas in our personality that we treat much like we did the acne we experienced in our teenage years. We go to a good deal of effort to simply cover them up, and try to doctor them with all manner of surface treatments that don’t get to the root of the problem.

Skin breakouts are affected by many factors, diet and heredity included. The same is true of our behavior. Those times that we act out are largely fueled by what we’ve fed our spirits - our spiritual food choices that day or lack of the same. And they reflect the remnants of a sin nature that we come by honestly, but that God can change in an instant in a true “born-again” experience, giving us a whole new parentage with the characteristics and privileges it contains. Then He goes to work changing our markings with the makings of a life that glorifies Him, one life experience at a time.

David knew that God was his shield as he fought his battles, as well as the strength in his arm and the power behind his throw. Similarly, the Bible states that God has beset us behind and before and laid His hand upon us. How good to know that wherever we go and whoever our foe, He’s got our back and can effectively eliminate even those who are sometimes just a little too hot to handle.

“…that He might present it to Himself as the glorious church, without spot or wrinkle or any such things, but that it should be holy and without blemish.”
(Ephesians 5:27 MKJV)
Posted by Elaine L. Bridge at 4:04 AM