When Second is First 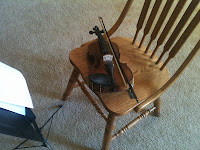 “Tomorrow, then, same time, same place?” Phil asked. The orchestra director nodded, and I groaned, envisioning another evening of violin practice instead of whatever other activity I had planned.

Phillip’s friendly, freckle-covered face was marked by his blue eyes and easy smile and was topped with a swatch of closely-cropped flaming red hair. I liked him fine in math class; it was when we walked through the doors of the music building that he switched from friend to foe, and a persistent one at that. We were fighting for a chair, a position really, and a title, that of concertmistress/master (depending on the gender of the person who came out of the battle with the top seat in the orchestra’s first violin section) and all the duties and privileges that accompanied it. It was one thing to land the seat, and another completely to keep it, I was quickly finding out, as Phillip scheduled daily challenges to unseat me.

In our freshman year of high school the top spot was held (as it had been the preceding three years) by a family friend and neighbor named Robert who played like a pro, largely because he practiced like one. Every day on my way home I’d pass by his house and see him through his bedroom window, violin tucked under his chin, working away. He was so far ahead of the rest of us in talent and ability that Philip and I simply joined the mass of violinists behind him who were counting the days until his graduation, an event that finally opened the floodgates of competition for those who followed after him and were soon fighting for his chair.

Perhaps because I had that vision of Robert’s daily dedication to his instrument, I had a better idea than most of what it took to be the best. And maybe that’s why I scoffed when I read the Message Bible’s version of Romans 12:10, a verse that instructs us to “practice playing second fiddle.”

Nobody has to practice to play second fiddle, I thought. Second fiddle is what you end up with when you don’t practice hard enough to play first!

Our flesh fights for first place in every area of our existence. So many of our choices are geared towards putting us at the top of the heap of whatever the current pile-on, and we’ll give up pleasures untold to prepare ourselves to end up in that position.

It’s not a new battle. Even the disciples back in Jesus’ day struggled with one another over the seating arrangement in the heavenly concert hall, trying to lay claim to the chairs to Jesus’ right and left (Matthew 20:20-28).  And Jesus told them in effect what He still says to us today, that greatness in the Kingdom of God is  measured in servanthood and how hard we work to help others succeed. It’s this reversal of our natural thinking that takes constant and daily practice.

In the physical world we long for the attention that follows success. It’s easy to carry that over into our spiritual lives. We desire to have God’s eye upon us, to single us out, to look upon us with special favor and love. Yet we easily forget is that we can’t earn God’s love. It was a gift at the outset, and nothing we have to offer can make Him love us more or less. When we truly grasp the concept of His absolute and unconditional love for each of us, suddenly the burden of competition is lifted from our shoulders, and we find we’re free to do as He commands, to love others above ourselves and to put their welfare above our own. It’s that latter part that requires daily practice as we strive to outdo each other in service and submission.

Perhaps it’s not good to liken the Christian life to a race, as that concept once again stirs up the “victory vice” that lies just under the surface for most of us. And yet the Bible encourages us to train as one who gets the prize. Perhaps we just need a different picture of what “winning” is all about. If truth be told, God probably wouldn’t even see who crossed the finish line first because His eye is on the straggler…that one who is lagging behind and perhaps in danger of dropping out. And there’s a special place in His heart for the runner who gives up his own golden opportunities to help the brother who is in danger of collapse, that they might instead finish the race together, shoulder to shoulder and arm in arm.

It’s a little late to tell Phil, but these days I‘m a lot more willing to play harmony to another‘s lead. It’s taken several decades and a lot of broken heartstrings to learn that when my eye is on the other guy, to see that he succeeds, God’s eye is turned towards me. There‘s simply no greater spotlight to be in than that.


“Let nothing be done through selfish ambition or conceit, but in lowliness of mind let each esteem others better than himself. Let each of you look out not only for his own interests, but also for the interests of others.”
(Philippians 2:4 NKJV)
Posted by Elaine L. Bridge at 4:06 AM