A New Name at the Baggage Claim 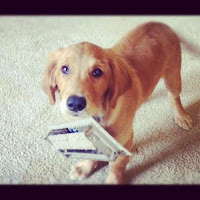 There’s something incredibly wrong with this picture.

Surprisingly, it’s NOT that there’s an air-conditioning vent hanging from the dog’s collar. The problem lies in that he seems to have no clue that it’s there.

The weather’s been HOT and the puppy in the household, much like his predecessor, decided that the best place to take a nap on such a warm day was right on top of the register through which the cool air enters the room. Apparently, while he slept, the new blue name tag on his collar slipped through the grill, hanging down and turning sideways inside the vent. When the dog heard truck tires coming down the gravel driveway, signaling my son’s return home from work, he jumped up as he always does to meet and greet the arriving family member, inadvertently pulling the register up with him, it banging and bashing him repeatedly in the chest as he bounded to the door.

At least, that’s what we think must have happened. Nobody else was home at the time but the beagle and the fuzzy black cat, and they’re not talking. So we have to assume that there would have been a trail of wreckage following hours of his panicked and burdened movements, and no such evidence existed. In fact, when my son walked in he was greeted by the dog as pictured above, simply looking at him expectantly, seemingly oblivious to the picture he presented.

My son pulled out his phone and quickly made a video of his initial moments talking to the dog and the pet’s eager response. It was impossible to watch it later and not laugh out loud at the absurdity of the situation and the dog’s excited attempts to welcome the returning loved one despite the ridiculous hardware he carried.

Thankfully God doesn’t laugh at us when we come to Him in a similar manner. Many of us lie in much the same state as my dog moments before God arrives in our lives, cooling our heels in spiritual slumber. Suddenly we are roused out of our sleep by the entrance of One Who excites and delights us, and we jump up and run in haste in His direction, not realizing that we carry all manner of baggage from our previous lifestyles along with us. There we stand before Him, eager and expectant, with attitudes and the consequences from earlier actions handicapping our efforts to get close to Him. And although they’re often plainly visible to others, most of the time we don’t even realize they’re there.

My son told us that it took a surprisingly long time to remove the vent from the dog’s collar. In his excitement the animal wouldn’t sit still enough for the job to be accomplished, the little parts that needed to be found and extracted impossible to locate in that mass of bouncing fur and banging metal. Yet think of the joy when the mission was finally accomplished and the pup could give and receive love in complete abandon once more!

Such joy is ours when we let the Father do His work in our lives. Sometimes He has to dig deep to reach and remove the source of our problems. While sometimes we’re blessed with a quick fix, other issues require patience we don’t possess for time and His touch to complete their combined efforts. But eventually that which separates us is removed and we are free to delight in the freedom and exhilaration of an unobstructed relationship with Him.

A few days after the situation with our dog, I noticed that his name tag no longer hung from the blue collar around his neck. Apparently his struggles with the vent and it’s eventual removal widened the hook enough that it slipped off the metal ring that once held it. When I mentioned to my husband that we needed a new one, he suggested that we look around the place for the old one first. I looked at the acres of grassy property though which the dog had romped in recent days and knew the situation was hopeless.

But we do exactly that at times when God sets us free from problems or life situations that have bound us in the past. Suddenly we’ve lost an identity that we’re familiar with, however troubled it may have been. Too often we’re tempted to go back and look for it, to settle back into a life to which we’ve learned to adapt, regardless of the sin and struggles it contained. Yet the Bible insists that he whom the Son sets free is free indeed (John 8:36), and if we’ve really been released from our past it’s impossible to truly pick it back up again for the simple reason that we’re no longer the same person we used to be. New creations in Christ, our old ways no longer fit us the way they once did. The baggage we used to carry now sits like suitcases turning endlessly on a luggage carousel at the airport, because what’s written on the tag no longer matches who we are in Him. God doesn’t just give us a new life, He gives us a new name, as well.

The episode with our puppy closes with a final thought: Be careful where you lay your head in your hours of repose; you never know what habits you might fall into and later pick up while your spiritual eyes are closed. When your Master arrives, let there be nothing to hinder the free flow of love you receive and bestow.