A Penny in His Pocket 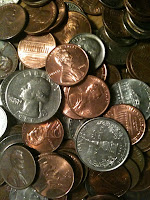 Getting dressed for work involves more than just pulling on some clothes anymore. More important than the store uniform itself is what goes into the pants pockets. Bound by habit as well as function, I slip a cough drop, a wrapped piece of candy or two and any notes to myself (like my seemingly daily grocery list) in the left side; on the right I keep a handful of change. It’s those coins that I find I can’t do without, as they cover lack of all kinds that I encounter in an 8-hour workday. Sometimes they quiet the rumbling in a belly that needs a quick bag of chips. At other times they might buy a bagger buddy a can of pop. And then there are times that they save a customer from having to run to the parking lot and dig around the floorboard of his car for a few more cents to cover his bill. I supplement my stash daily with the change from my own transactions and the contents of the zippered coin compartment of my wallet when necessary to ensure that when I walk through the workplace doors each day, I’m fully supplied.

It’s no wonder then that preacher Randy Clark got my attention in a recent message when he asked God to make him a coin in His pocket, available for Him to spend. God likewise has work that He’s about on the earth, and His people are the tools in His shed, the weapons in His arsenal…the coins in His pocket that He uses to get it done.

When I reach into my pocket to fill a need of some kind, I pull out a mixture of coins in my hand. Pennies, nickels, dimes and quarters all come out together, and I select what’s necessary from what I find in my fingers. God simply does the same. Each of us carries a certain spiritual denomination, one that doesn’t refer to our value in God’s sight, but rather the size and kind of job we can handle, based on the giftings and talents we possess. God picks and chooses from what He has available to accomplish His goals.

The Bible says that we all are given a measure of faith, which is our starting point in our spiritual walk. It’s what we do with that faith that matters. The Parable of the Talents found in Matthew 25 tells the story of a man who entrusted his wealth to his three servants while he went away on a journey. One servant was given five portions, or talents, and used them to earn five more. The second servant put the two talents he was given to work and raised another two. But the third simply buried the one talent he was responsible for in the sand and earned nothing but his master’s scorn. His one talent was taken away and reinvested in the one who achieved the most with what he had been given.

We may start off with just a penny’s worth of faith, but we don’t have to stay that way. God reminds us that even those with faith the size of a mustard seed can move mountains in the spiritual realm. He desires that we put what faith we have into action, and watch it grow from there.

The old saying, “See a penny, pick it up, and all the day you’ll have good luck” doesn’t mean much to a lot of people any more. These days most folks walk right by a copper-colored coin they see lying on the floor, figuring it isn’t worth the effort to bend and pick it up. Thankfully God doesn’t see penny-people that way. Rather He seems to take special interest in those who are beaten down by life and abandoned on the sidelines, looking past their current circumstances to the potential hidden within, aware of what could be released if only some effort was put into restoring and polishing them. He sees their purchasing power in the spiritual realm.

Maybe the difference is that when we pick up a penny, it’s still a penny. But when God picks up a life, He makes it brand new, and the possibilities before it suddenly become endless. He already has a plan for that person (Jeremiah 29:11), and soon that “coin” is burning a hole in God’s pocket, as the saying goes, so eager is He to put it to work on His purposes.

Oh, that we would truly see ourselves as God does, line up our thinking with His, and strive to become all that He knows we can be. That’s when the abundant life we‘re promised becomes a reality, and we find ourselves shouting a slightly altered version of Isaiah’s famous prayer, “Here am I, Lord! Spend me!”