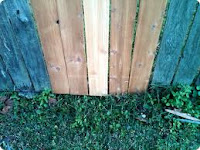 The back door opened and Nina bounded outside, thrilled to be released into the brilliant sunshine and fresh air of another gorgeous California morning. An active German Shepherd pup, as she trotted the perimeter of the enclosed back yard, she could smell the Labrador Retriever in the yard next door, and stopped at one particular spot of the fence where the wood was rotten and breaking apart somewhat, giving her the best access to the tantalizing odors coming from the other side. She pressed her black snout hard against the barrier and breathed deep, then snorted a time or two before pressing even closer and inhaling deeply again. And suddenly, she felt the weakened wood give a little. Instinctively she moved in again, pushing a little more eagerly, the presence of the dog on the other side a magnetic force that pulled her growing frame hard against the boards between them.

Suddenly the wood gave way. With her head already through the hole, Nina was quickly able to push and wiggle the rest of her body to follow. Unfortunately what she met on the other side was not the dog she’d been dreaming of, but his owner, instead, who just happened to be coming down her back steps in time to see the intruder coming through. Quickly she hustled Nina back through the hole and blocked it somewhat before hollering to her neighbors that the barrier had been breached and they needed to bring the dog inside.

My sister owns the German Shepherd as well as a terrier of sorts named Sam, and shared the story of Nina’s Great Escape in an email in which she detailed the difficulties the broken fence now presented in their lives. The easy solution was to nail a board over the damaged section, but it was obvious that a larger scale repair job would have to be done over the weekend, weather permitting. There would be a span of several days in which the fence would be torn apart, so my sister’s family began rescheduling their days to accommodate the need to walk the dogs and take them elsewhere to run and get the exercise they require.

And so it is that many of us have fences to mend in the relationships surrounding us. The best of long-standing friendships can have a weak spot that has developed over time. When one person repeatedly pushes on that sensitive area, the other has a tendency to push back, and the result is an eventual break in the unity between them. At that point sometimes all manner of unexpected emotions come pouring through the gap, widening the break and forcing an eventual separation of two lives that once walked side-by-side in harmony.

The question then arises of what to do about it. One choice surely is to simply do nothing, to let the chips fall where they may, so they say, and leave things as they currently are. But as my sister found out, this requires a surprising amount of work in itself. Lives have to be rescheduled and habits changed to avoid confrontation with the other person, demanding time and attention that would otherwise be devoted to worthier purposes.

Too often we likewise try quick fixes in our relationships, perhaps apologizing for sharp words and offensive actions without exploring the deeper feelings which prompted the anger in the first place. Eventually the underlying issues have to be addressed or they will continue to fester unseen and erupt again somewhere further on down the road.

There are other factors to consider, as well. Mending fences can be an expensive operation. My sister weighed the price of wood and labor against the preciousness of what could be lost and found that she really had no choice - she couldn’t take the chance of her dogs getting out and being injured in some way, possibly never coming home. Similarly it may cost us something to lay down our pride and devote the time and effort necessary to make things right in our relationships. Perhaps the decision is easier when we consider the depth of friendship and the years of memories that could be tarnished or lost forever if we don’t.

The fence is finished now, the repairs complete, and the dogs are running happily in their respective yards once more. In the end it only seemed right that my sister and her neighbor split the cost of the repairs. What’s true with broken fence boards is likewise true in ruptured relationships - both sides share the blame for the break but reap the benefits of a restored one, especially when they work together to make things right.
“I urge Euodia and Syntyche to iron out their differences and make up. God doesn’t want his children holding grudges.” (Philippians 4:2 MSG)
Posted by Elaine L. Bridge at 6:55 PM