The Fourth is Free 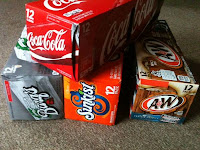 When first-of-the-month shoppers combine with Super Bowl devotees in full party preparation mode, the end result is a grocery store madhouse of people filling their shopping carts to later fill their bellies with the wares to be found on the grocery store shelves. Lines are long at each register and tempers are short.

Wanting to cash in on this early February spending frenzy, the store details incredible savings on certain products in the weekly ad to draw the buyers in. One such deal occurred in the pop aisle, where all brands and flavors were on sale.

Buy three, get one free. It seemed simple enough. But you’d be surprised at the amount of confusion that one short sentence can create.

In the midst of the shopping madness, grocery store cashiers tend to rush each customer through their order as quickly as possible to get to the next person waiting impatiently behind them. Yet after a week of scanning cans of pop, it’s hard not to notice when a shopper puts just three 12-packs on the belt instead of four, thus missing out on the freebie. The question is what to do about it. There is a temptation to say nothing at all, to just scan the groceries as they come down the line and push the person on through, justifying the action with the thought that the customer knows best what he wants to buy. Yet it takes just a minute to explain the deal to them and offer to scan an extra pack of pop so they can go back and get what’s coming to them. Some people are simply in a hurry to get out of the store and don’t care about the extra savings. But in this time of tight budgets, most people are genuinely grateful that the matter was brought to their attention.

Life can be difficult to understand, as well. We go about our days looking for signs to guide us and send us in the direction of the best deal to be found in all areas of our lives. Conflicting information bombards us, and too often what seems to be good information one week is like the prices on an out-of-date sale ad, simply invalid the next. Truth appears to be as elusive as the good health, emotional stability and financial success we all seek. Sometimes even our spiritual guides are not the help they should be in navigating us through this life to our forever Home.

Our Christian walk can become much like an over-busy weekend in the grocery store. Like everybody else we have too much to do in too little time, and we tend to rush through our days trying to get it all done. Yet in our interactions with people it’s hard not to notice when they haven’t fully grasped the concept of grace, that their salvation has already been paid for by Christ’s death on the cross. Many are still trying to pay for that which has been offered to them for free. It’s theirs for the asking, as well as the favor found in a Christ-filled life on this earth in terms of health, help, and hope for the future.

The question is what to do about it. As a grocery store cashier and a Christian, I live in both these scenarios. And to my shame I have to admit that I’m much more likely to point out a missing sale item than an overlooked salvation, verbally, at least. There are reasons, of course - one too many rebuffs from people who are so consumed with the here and now that they can’t consider the hereafter. It’s easy to say that salvation is a personal matter and everyone has to figure it out for themselves. Yet I can’t get past the fact that somebody risked my rejection in telling me. My soul was saved and my life dramatically changed. How can I possibly do less for somebody else?

The sale prices in our store ads are good for just a week. Salvation is likewise a limited time offer; it ends when a life does or the world does, whichever comes first. If we’re too busy, too timid or too lazy to tell somebody about it, for them it could be too late. Eternity is simply too long to think of missed opportunities.

A free pack of pop is good only as long as there are cans left in the carton, but eternal life is just that - good times without end. Consider which is the better deal, and then let your heart of compassion convince you to get the word out. God will be glad you did.

“All who call out to the Lord will be saved. How can people have faith in the Lord and ask him to save them, if they have never heard about him? And how can they hear, unless someone tells them?”
(Romans 10:13-14 CEV)
Posted by Elaine L. Bridge at 7:05 PM