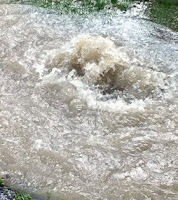 I stepped out onto the back deck with my first cup of coffee of the morning and immediately sensed that something was wrong. I heard a strange noise I couldn’t identify but that sounded vaguely like running water. Looking up to see if a sudden shower was perhaps splashing raindrops on the leaves of the trees overhead before reaching the wooden planks I was standing on, I saw only sunlight and clear skies above me. Drawn by the sound to the left edge of the deck, I looked over the railing and was surprised to see that the stream which borders the yard was running like crazy, the water rushing down it’s path into the woods behind the house. The spring storms were long gone, and the summer had turned hot and dry. The local crops and ground were desperate for rain that had been withheld for weeks. Surely I would have been awakened by a storm of the severity to produce as much runoff as was flowing past the house, yet there was no sign that the surrounding property had received any relief from the deepening drought. Something besides rain was sending the water downstream. Resolutely setting my coffee cup down, I decided I’d better go take a look.

I hiked upstream to the top of the property, veering left around the fence to walk up the road, assuming the water was running down the ditch from somewhere up the hill. The brushy fence line along the side of the pavement blocked my view of anything beyond it, but the farther I went, the less clearly I could hear the water, till I gathered that I was going to have to stick to the streambed itself if I was to find the source of the flow. My feet sunk in the muck of the waterlogged footpath that crossed the stream to the neighboring lot, and I noticed water pooling around the culvert that emptied out from the other side of the road. Yet the water wasn’t coming out of the pipe, but forming a large puddle in front of it. Suddenly I noticed a spot where water was bubbling up from the ground itself. A broken water line was surely the culprit! Soon the water company was notified and before long a repair crew was said to be on their way.

Hours after the pipe had been replaced and the workmen had pulled their trucks off the property, I sat thinking about how my attention had been alerted to the problem in the first place. It was the sight of something unusual in my everyday surroundings - water flowing where none should have been - that caught my interest and led me to investigate further. And surely God uses the same tactic in drawing people to Himself. They see one of His followers exhibiting behavior inconsistent with what one would expect in the circumstances surrounding him, such as fearlessness in the face of a terminal illness, strength in time of overwhelming sorrow, or great calm in the midst of a calamity of some sort. Such responses lead the observers to look deeper into the life and beliefs of that one whose reaction is out of the ordinary. They track what they see to its Source, and oftentimes their lives and futures are forever changed as a result.

I know that the words written above are true, because they describe a similar situation that happened to me. Decades ago now, when I was first dating the man I would eventually marry, I had fallen in with a group of people who worked hard all week, partied hard every Friday and Saturday night, and then recuperated on Sunday to do it all over again the next week. I was surprised when I met Jim to learn that he didn’t live the way I and everybody else I knew was living. Rather, he found his joy in his relationship with God and the fellowship of people who knew Him. He talked about the church service that week and his Bible study group meeting with as much excitement as he did the latest softball game he’d played in, and it amazed me. I’d gone to church my entire life and believed in God, but the idea of being friends with Him and having fun in His presence was foreign to me. Intrigued, I eventually followed my boyfriend’s happiness and contentment to it’s source in a relationship with Jesus, and found that joy, peace and love can bubble out of a soul the same way that water bubbled out of the once-dry ground in my yard.

When the work crew first arrived on the scene that day, they told my husband that the extremely wet spring we’d had, followed by a hot and dry summer, was causing the ground to compact and break the pipes. The same thing has happened to some of us. A once-thriving relationship with God may have given way to a dry season in life. The increasing pressure surrounding us finally broke our hearts and brought us back to the love relationship we once knew with God and the Living Water that flows out of the same.

The repairmen went on to tell us that there were a dozen or more such leaks all over the city, and they were having trouble keeping up with the calls for assistance because of a shortage of help. And isn’t that God’s problem, as well? He says that the fields are ripe unto harvest, but the workers are few.

The truth of the matter is that people are at the breaking point all around us, and we don’t have to be on a church payroll somewhere to offer assistance. All that God asks is that we first let Christ flow freely out of our lives, and then that we be ready to point others in His direction when that running stream in a desert place draws the people around us in for a closer look.

“…Always be prepared to give an answer to everyone who asks you to give the reason for the hope that you have…”
(1 Peter 3:15 NIV)