Not Big on Bugs 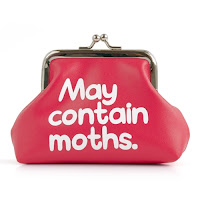 “There’s a moth flying around down there,” my husband warned, pointing to the floorboard on my side of the vehicle. Concentrating on the text I was sending and picturing a tiny bug fluttering about my feet, I said, “If I don’t see it I’ll be fine. I’m not worried,” and continued tapping the screen and pushing buttons.

“Okay, I just thought I should warn you.”

Finished at last, I reached down to slip my phone in my purse, only to find a HUGE winged creature perched on the top of the front cloth panel, the size of a small bat it seemed to me, it’s black, beady eyes staring straight at me as if daring me to push the phone past it.

I didn’t scream, but I hollered good and loud. Repeatedly.

“You didn’t say it was the size of an airplane!” I held my phone in my tightly clenched hands and scrunched as far away from my purse and The Creature as possible without diving into the backseat, hoping that if I didn’t look at it wouldn’t advance any more in my direction. We were headed to a wedding, and so I concentrated on whether I could make it through the ceremony without the essentials of life packed in my bag. I surely wasn’t going to touch the latter until that bug was long gone. I could envision us now, seated in the pew, watching the wedding party come down the aisle and thinking thoughts of something old, something new, something borrowed…when suddenly something flew out of my tote and scared the living daylights out of me all over again. It just wasn’t going to happen.

Have I mentioned that my husband is a hero? He pulled into the parking lot of a farm market we were driving by, got out of the car, came around to my side of the vehicle and opened the passenger side door to where I was still sitting frozen against the gearshift. Realizing I was never going to hand him my purse, he reached in and got it, set it on the trunk and began his search for the winged invader. Having apparently been scared itself as badly as it had frightened me, it had taken a tumble into the depths inside.

“You’re going to have to pull everything out. It’s in there somewhere,” I said with certainty, having by this time unlocked my legs and gotten out of the car, checking the floorboard area as I did so to make sure the thing wasn’t still in the vehicle.

Resolutely he began removing items and setting them on the lid of the trunk. I carry a big bag that it’s easy to stuff a lot into, and much had been thrown in there during the activities of our busy summer, most of which were soon on display on the hot metal surface. Out came the umbrella, the water bottle, the notebook and the wallet, followed by a few unmentionables that I normally wouldn’t have brought out for public viewing. But this was an emergency.

“There he is!” my husband spoke at last, grabbing the still fluttering monster with his bare hands (ugh!) and letting it loose on the gravel parking lot. Much relieved, I packed the items back in my purse, got back in the car and quickly slammed the door shut before it could fly back inside, and we continued on our way into town.

I write the words above to give you the understanding that I’m not big on bugs of any kind. But because God is relentless in His attempts to get a point across, I found myself a couple of days later face to face with a grasshopper sitting on top of the microwave in my kitchen. I recognized it, of course. I’d seen it in a corner of the living room a day or so earlier and had done nothing to remove it, figuring it wasn’t hurting anything, nibbling on my husband’s houseplants, at worst. Surely the cat or the dog or the long-suffering spouse would take care of it eventually. Now perched on top of the appliance, it didn’t look particularly scary, but the problem with most bugs is that they don’t stay in one place. Even as that thought crossed my mind, the grasshopper launched itself over my head, causing me to duck wildly, my heart stopping momentarily in panic, and my coffee very nearly spilling all over the kitchen floor.

“I give,” I said to God a short time later. Sounding much like the plague-besieged Pharaoh of Biblical fame I pleaded, “No more bugs, evil butterfly-cousins, or insects of any kind. Just tell me what You want me to hear, and I’ll listen and act upon it.” He had definitely gotten my attention.

Not surprisingly, He brought up the subject of my reluctance to deal with things that scare me. I avoid confrontation, not just with bugs, or people who bug me, but problems and painful situations of any kind, choosing rather to run away from them than figure out a way to deal with them. It’s as if I believe they can’t bother me if I don‘t look at them, and yet in my heart I know that they’re still about the place…somewhere. And so my daily activities are hampered as I go about life with a wary eye and a tentative step, always wondering what might jump out at me from around the corner. God simply wants a better life for me than that, and frankly, He can’t use me if I’m a frightened follower rather than the fearless forerunner He created me to be.

A recent situation at work came up as an example. I love my job, except for one assignment I’m occasionally given that makes me incredibly uneasy for a variety of reasons. Yet my personal preferences carry no weight with my supervisor, who simply expects me to do and go as I’m told. My joy in my job began to disappear completely, swallowed up by the nagging fear concerning my possible job assignment each day when I clocked in at the start of my shift.

When I wondered why God didn’t deliver me out of this situation, His response was that in Him I am a victor, not a victim, and as such I didn’t need rescuing. What I needed instead was a strategy to help me overcome the problem, which He was perfectly willing to give upon request. The instructions He subsequently gave me became the stones in my sling to use against the Goliath that stood in the way of my once again enjoying my workday. When I ran at the giant instead of away from him, my fear fell dead at my feet.

Several years ago a friend of mine and her family lived in an old farmhouse they rented in a rural area of Ohio. When the weather turned cold, a couple of harmless but horrible-looking black rat snakes went up inside the walls of the house to over winter in the relative warmth of the attic. When spring came around again the reptiles were once again on the move. One day my friend and her loved ones were gathered around the table enjoying a meal when a snake suddenly dropped through the roof through the light fixture and hung above the table, dangling mere inches in front of their faces! They screamed, dropped their forks and knives and raced out the door. Only after their hearts quit pounding and they had caught their collective breath did they realize that while they were all safe and sound outside, the snake was still inside…somewhere. They had no choice but to go back in and look for it, but apparently it had pulled itself back up through the hole it had dropped through. For days after that they tiptoed around the house, opening drawers and cupboards slowly for fear of finding a snake coiled up on their underwear or towels, and examining light fixtures carefully before walking underneath them. But they just couldn’t live like that. So with the help of their landlord they went on the attack, eventually capturing and removing the snakes and blocking up the places where they had gained entry.

We simply need to do the same. Every day God spreads a banqueting table of incredible life experiences out before us, inviting us to come and partake. Yet when we least expect it, the enemy of our soul drops into our lives in the form of that which we fear most, causing us to flee from what is rightfully ours, that which has been purchased for us on the Cross and provided for our enjoyment. Because he has no place at the table and no portion in the bounty spread before us, his desire is to keep us from enjoying it, as well. Eventually we come to a place where we’re just not willing to let him get away with it any longer.

Unfortunately, the physical and spiritual insect plagues in my life have not stopped, no do I even expect them to do so any more. But neither do I fear them like I used to. Through them God has taught me that if I‘ll turn to Him for advice and assistance, I’ll find that He is still very much in the business of setting His people free.

“You shall tread upon the lion and adder;
the young lion and the serpent shall you trample underfoot.”
(Psalm 91:13 AMP)