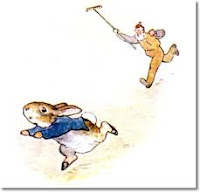 I might as well change my name from Bridge to McGregor, as I seem to have spent the summer chasing bunnies, much like the gardener by that name in Beatrix Potter’s The Tale of Peter Rabbit. I don’t have a garden, and I rather like the sight of the cotton-tailed creatures hopping about the yard. The problem lies with my son’s beagle, who has an inherent hatred for rabbits, squirrels, and even low-flying geese. Especially rabbits. The minute he spots one through the living room window he’s mentally on the attack, barking incessantly and at very high volume until the intruder is removed from his sight.

But bunnies are not intimidated by a dog barking inside the house. Rather, they sit frozen in place, the one eye on the side facing the trouble watching warily and waiting for further alarms. So the barking won’t stop and the noise level doesn’t’ drop until for the sake of the still-sleeping family members I slip my feet in my flip-flops and head outdoors to chase the trespassers away.

You may wonder why I don’t just open the door and let the dog do the duty himself. But the property is not completely fenced, and he would chase the animal not just out of the yard but probably out of the county and very possibly out of the state, as well. While I don’t care if I ever see the rabbit again, I am partial to this particular puppy, noisy though he may be, and try to keep him close to home. So I take care of the problem myself.

Few things are as harmless as a bunny in the yard. Yet when Mr. McGregor spotted Peter Rabbit in his garden, he called him a thief, eating what didn’t belong to him. And this summer my spiritual life has been full of seemingly harmless thoughts that have nibbled their way into my subconscious and likewise stolen away much of my peace and joy. They are worry over life situations over which I have no control and have previously committed to God, yet they sneak back into my thought life when I’m not looking and consume too much of my time and thought life. Thankfully the Holy Spirit is my watchdog who alerts me to their presence again and forces me to run them off once more.

Perhaps your problems are much more intimidating than the bunny-sized ones that I seem to be dealing with. Yet the size of our problems is not the issue, as dealing with them is God’s job, nor ours, once we’ve committed them to Him. There’s simply nothing too large for Him to handle. But dealing with the worry over the same He leaves to us. He tells us so in no uncertain terms: “…Do not let your hearts be troubled, neither let them be afraid. [Stop allowing yourselves to be agitated and disturbed, and do not permit yourselves to be fearful and intimidated and cowardly and unsettled.” (John 14:27 AMP, emphasis mine). In other words, “Get off your duff and chase that bit of fluff out of the yard!”

I’ve found that it’s not enough to merely chase the rabbits out of the dog’s sight, as they soon hop back to where they were feeding before. Rather I have to chase them completely off the property, pursuing them till their white bouncing backsides wiggle through an opening in the fenced boundary of the yard.

I notice that my gardener friend of storybook fame didn’t enter the bunny battle unarmed. Rather, he brandished the tool he had at hand as he ran after the intruder. And it’s surely no coincidence that the rabbit feeding times at my house seem to coincide with my devotional times, both morning and evening. It‘s as if God wanted to remind me that I likewise have my weapon of choice, the Word of God and the promises it contains, always close at hand - in my heart and on my lips, as is promised in Deuteronomy 30:14. Clearly it’s there to be used.

So the next time you are feeling disturbed or unsettled, let the Holy Spirit nudge you as He does so often to me, to look through the windows of your soul and see if there are any worries nibbling away at your peace and contentment. If you find some there, don’t just bark at them in vain, but in your best Mr. McGregor imitation, pick up your “rake” and chase those intruders all the way back under the garden gate. 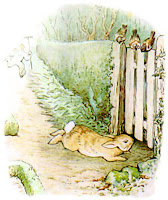 “Be anxious for nothing, but in everything by prayer and supplication, with thanksgiving, let your requests be made known to God; and the peace of God, which surpasses all understanding, will guard your hearts and minds through Christ Jesus.”
(Philippians 4:6-7 NKJV)