A Need to Knit 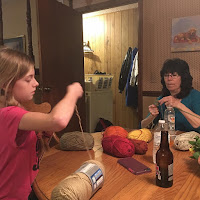 There it is in the photo to the left – the reason I picked up my knitting needles again after laying them down forty years or so ago. Do you see it?

It's not the multitude of beautiful yarn available, the abundance of fun patterns to work up, or even the joy of passing on a beloved hobby to a new generation of needleworkers...wonderful though all those things are.

Nope...it's the phone lying face down on the table, ignored for the moment in the midst of colorful skeins of wool, attention focused on something other than Facebook, fingers and thumbs busy with with actions other than tapping, texting, scrolling and sending for a minute or two.

Don't get me wrong; I love my phone. It's my constant companion, the answer to my many questions, my entertainment when I'm bored... my connection to the rest of the world. But it was becoming my world, and I didn't like the way I reached for it every time I sat down, woke up, or a commercial break interrupted the program I was watching on TV. I needed to make a change.

And suddenly I got the urge to knit. I remembered the comfort of relaxing with the latest project, the satisfaction in seeing the work grow underneath the clicking needles...the freedom to let my mind wander while my hands remained happily employed with knit and purl stitch counts. Now I problem solve, I dream; my mind is free to set its own agenda instead of constantly searching other people's posts for something new to think about.

But what to knit? Pairing purpose with the pleasure I found in creating items added excitement to this venture; couldn't I make things other people could use? The ideas started flooding in. Of course, there were the obvious; little gifts for Christmas, seasonal items to decorate the home, baby items to give as shower gifts or donate to needy mothers. My sister mentioned a group of knitters in her area of the country who were making scarves, mittens, and hats to hang on park fences for homeless people to find and use; soon I found a local group I could contribute to who were doing the same. Now I find I can't knit fast enough to finish all the things I want to make before one season ends and another arrives with a whole slew of new ideas of its own.

It turned out I had it partially right. There was a human purpose to pursuing a passion...but what if there was a divine connection, as well? For no apparent reason I selected a snuggie as my first project, one of those little baby sacks or “cocoons” in which to cuddle a newborn, and did it up in blue, even though nobody I knew at that moment had a pregnancy nearing its due date. As my knitting grew, so did a friendship with a coworker who was new in town and who soon found out she was pregnant...with a little boy. It eventually became obvious to me who the snuggie was to be given to, especially when the project on my needles and the baby in her belly were “done” at the same time. But it was as I was writing a note to go with the gift that I felt a nudge from God to write a few words from His heart, as well as my own. It wasn't anything mystical or deep, just a few lines of light and love spoken into the life of a young woman at a special time in her life. And suddenly it hit me that that was why I had picked up my my hobby again after such a long period of time...to deliver that very message at this particular time. The pleasure I found in the action was beside the point.

A light bulb turned on in my head. What I thought was my need to knit again was actually God's need for me to do so, that He might deliver a message of love to a daughter I “happened” to be connected with. What if God had me learn to knit forty years ago just so that He could call that skill into play decades later and use it to bless a girl who wasn't even born at the time I began? Could it be that many of the details of our lives that we thought originated from our own thoughts and desires are really planted inside of us by God to bud and bear fruit in the time of His choosing, in ways we couldn't have imagined originally?

Looking back, I realize now how many other passions in my life have come and then seemingly gone, only to be resurrected and given new life at a later point in time. How good of God to replace the sadness when a particular season ends with an eager hope that it may roll back around again on down the road! And, oh, how the joy we find in them is multiplied when those interests are used for God's purposes rather than just our own!

And my social media addiction? I still use my electronic devices plenty...now mostly to find patterns on Pinterest or check in on the picture posts of my knitting buddies' current projects. The internet lists a host of physical and emotional benefits that come from picking up a pair of knitting needles; for me the best was the spiritual blessing that came with the excuse to put the phone down.

“...make it your ambition to live quietly and peacefully, and to mind your own affairs and work with your hands...”
(1 Thessalonians 4:11 NIV)
Posted by Elaine L. Bridge at 3:39 AM