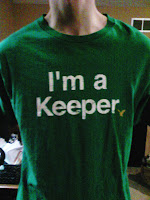 God can sometimes speak a message using no more than two letters placed side by side.

The first such combination to get my attention was one that most church-going Christians are familiar with…the P.K.‘s, or Preacher’s Kids, among us, a segment of society with unique characteristics and traits based on their experiences while growing up in a minister’s home. But in the 1990’s the P.K.’s I heard about all the time changed to the Promise Keepers, a movement aimed at encouraging men to be true to their promises to God, their wives, and their families. Then my kids turned into teenagers, and one in particular spoke nothing but the language of B.K., or Burger King…and it was in that period of my life that I very nearly became addicted to the Whopper Jr. with cheese. Maybe it was the promise that I could have it my way that drew me back again and again. But lately the King has been drawing me with another message using the letters B.K., one that has little to do with burgers and fries. Instead it centers on the importance of living life His way, specifically in the area of being my brother’s keeper.

It’s first in Genesis that the question of our responsibilities to our siblings arises, when God questions Cain concerning the whereabouts of his brother Able, and he responds with the query, “Am I my brother’s keeper?” It’s a question God is still answering in the affirmative today.

To tell the truth, the past thirty days have been pretty rough on many of my spiritual siblings, those likewise born into the family of God who are walking the road of faith beside me. Day after day has brought little but bad news in hospital rooms, doctor’s offices, emails on my computer and text messages on my phone.

Clearly there are some things God expects of us in response. To start with, He desires that we keep an eye on our brother, to know where he’s at, spiritually rather than physically. That means, of course, that we watch our brother’s heart, not so much his comings and goings. This can only happen if we communicate regularly and have built a relationship between us, so that we are able to talk freely and honestly about the difficulties we’re having and the struggles we face without fear of being judged or condemned.

The second expectation then is that we keep our brother’s confidences to ourselves, to be people who can be trusted not to divulge that which has been shared in private conversations and counseling sessions. We’re to help keep our brother on track, steering him back on course when he gets distracted or knocked about by the cares of this world. It might be up to us to just keep him moving, to pick him up and help him along when he feels like dropping out of the race or giving up on the Christian life completely. In order to do that, of course, we have to be keepers of our own spiritual lives, that we continually have something of value to share. All of the above can be summed up in Christ’s command that we simply keep loving one another as He has loved us.

In fact, the only way we can do as God expects is to keep our eye on the one Brother who taught us how to live a life of loving others. Just as He said He did nothing except that which He saw His Father doing, so should we keep our eyes focused on the Jesus we see in the Bible constantly loving, lifting, and leading others, and who now lives in our hearts to spur us on to lives of the same.

God’s purpose in this is two-fold. He wants us all to make it to the spiritual finish line, of course. But His heart is moved by those who have yet to even enter the race. It’s His hope that they will see Him in the love we have for one another (John 13:35) and be drawn by His Light on their own dark days.

Finally, God expects us to keep our brother in prayer. A lot of the people I love are in difficult places right now, and I approached my devotional time this morning with a heavy burden on my spirit as a result. Not surprisingly, God had the solution ready and waiting for me. He told me to list those whom I was most concerned about on the open page of my prayer journal. Obediently I wrote the names of four people whose needs were foremost on my heart, acknowledging again my complete inability to alter the life situations of any of them. On a post-it note I then was told to write out the words of my favorite verse: Be anxious for nothing, but in all things, through prayer and supplication, with thanksgiving, let your requests be made known to God. And the peace of God, which passeth all understanding, shall guard your hearts and minds through Christ Jesus. (Philippians 4:6,7) Next I was instructed to tape the note paper on top of the names I’d written moments earlier. When I did so, I noticed that I was unable to see the problems I’d put down earlier, covered as they were by God’s promise of peace through the simple acts of prayer and thanksgiving.

A couple of hours later, I stopped at the local Starbucks, noting that it was shortly before noon. I was surprised to see the store nearly empty, so used am I to the long lines of the early morning hours when people are looking for a hot pick-me-up on their way to work or school. But I believe that it’s never too late for a latte, especially when pumpkin spice is on the menu, and as I placed my order I soon realized that fewer people in line meant more time to chat with the brew master behind the counter. Nodding my acceptance to his offer of an extra shot of espresso, I asked how his day was going.

“Well, I’m standing up. And I know where I am. So I guess it’s a pretty good day,” came his somewhat surprising reply. My heart, so recently released from the weight of its worry about others, suddenly laughed in response. My “brothers” and I, despite the situations we’re facing together, are likewise still standing. And it doesn’t matter where we are, because we know Whose we are. Truly that makes all the difference, and any day, no matter how difficult, a good one indeed.