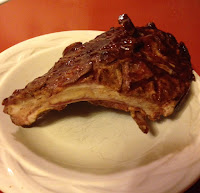 “You're doing a demo in deli today,” I was told after I'd clocked in to work. “Giving out samples of ribs.”

Thinking it a pleasant change of pace from my regular cashier duties, quickly I headed to the back of the store where I found a table set up with all the necessary supplies and a deli cook already cutting up the racks of ribs she had just pulled out of the oven. It was the start of Labor Day weekend, and many people would be gathering with family and friends to bid farewell to summer. Offering the shoppers a taste of the store's pre-cooked baby back ribs alerted them to the possibility of eating such great summertime fare without the work of cooking them up themselves. Many tossed a half-rack or two into their carts before continuing on.

It wasn't your usual shopping sample, to be sure. A hot piece of meat covered with barbeque sauce, it took the sight of the nearby napkins to convince many to accept the treat and give it a try despite the accompanying mess. But one by one, as they returned to discard the bones and waste in my trash basket, they uniformly declared them to be delicious.

Soon the deli cooks had trouble keeping pace with the rate at which the shoppers were gobbling up what was offered to them, and I was told to be a little less aggressive in getting the customers to sample our wares. Thus “repeat samplers” began to be a problem. Most people were reticent to ask for another sample; others not so much. One little boy in particular stole my heart. After tugging on his dad's shirttails repeatedly to get his attention and let him try one of the ribs in the first place, he was soon standing before me again, a happy smile splitting a round little face that was covered in barbecue sauce from ear to ear.

“Can I have another?” he asked. Totally unable to resist him, I handed him what he wanted and he ran off to rejoin his dad.

Some of the adult customers were less appealing, and I had to remind myself repeatedly that I was just there to hand out the samples, not judge people on their manners. And I certainly couldn't vocalize my disdain. So I kept my mouth tightly closed when one particularly annoying man came by for a third time with his hand extended for more...until he complained that the shopper before him had received a bigger piece!

“Isn't this number three for you today?” I asked in reply. Embarrassed, he laughed guiltily and walked away, rib in hand, and I knew I had broken the cardinal rule of not alienating a customer in any way, shape or form. It was one I had struggled with repeatedly with this particular man, an aggressively social shopper who regularly halts the checkout process completely while he tells jokes and strikes up conversations with total strangers. I groan inwardly whenever I see him headed my way.

God doesn't, however. As if to prove the point, He immediately sent the little round-faced boy back to likewise ask for a third sample, his bright smile and sparkling eyes his bargaining chips. I folded completely, handing him a juicy hunk of meat with a smile to match his own and not a word of condemnation. Noting my response to the little boy, God nudged me and said, “That's how I feel when I see the other guy you so dislike.”

In that moment I was forced to admit that my response to people is based at least somewhat on their behavior, their looks, their personality and my personal preferences in those areas. God simply sees everybody as His precious child. It's not that He is blind to our imperfections; they are simply covered up in the blood of His Son. Thus He responds to us based on that relationship, rather than the right or wrong in our actions. And it is the overwhelming love He has for each us that works in us to bring those actions in line with the “good” that He proclaimed over us at creation.

And so I smile now when I see that particularly annoying shopper coming towards me, because I know God is doing the same. Funny, it is me who was changed as a result of our last encounter, while I thought it was he who needed the work! God reminded me with a chuckle of His own that He can still do a lot with a piece of rib...