Born in a Barn 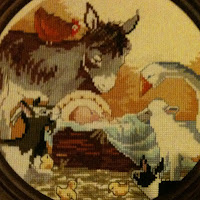 “Close that door! Were you born in a barn?”

Well…yes, He was. He was born in a stable of some sort, at least, likely surrounded by animals, and laid in a manger of hay. And He’s been leaving doors open behind Him ever since.

Many more years ago than her youngest daughter is old, my friend Terry had an encounter with God. While I don’t know the details, I do know that Jesus came knocking on her heart’s door one day, and she let Him in. Not only did He never leave, He left the door open behind Him, and countless others have followed His lead into her heart and life.

I joined that crowd when she began hosting a mid-week fellowship and Bible study gathering several years ago and literally opened the door to her home for a group of us who have been faithfully meeting there ever since. For years upon years now she’s rushed home from her job on a Thursday to start a meal for the lot of us and then sits on her porch and waits for us all to arrive. Enveloped in hugs and love when we do, we’re ushered inside for a time of food and friendly banter. When the meal has moved from plates to waists we move the dishes to the kitchen, break out the coffee cups, pens and worksheets and study the night’s lesson in one accord. The evening ends as it began, with laughter on the front porch as the crowd gradually dissipates into the cars that fill the driveway and heads for home.

As the last guest leaves and her door is shut on the night, Terry’s heart and life are still open and available. Because she freely shares her struggles and foibles, friends and acquaintances feel comfortable to be real about theirs around her and come calling on the phone or crowding a campfire in her backyard as together they search for the keys to dealing with the problems they face. More often than not her visitors find Jesus in their discussions with her, whether they open a conversation with Him on their own at that point yet or not. They are at least introduced to the Master Locksmith who can open any door that is closed to them, whether it be a physical door of opportunity in their lives, or the entryway into the heart of another person that was closed over an event that happened in the past. And it begins by responding to the pounding of their own hearts, and letting Him in.

I have a fear of facing a locked door on my car. Because the key contains a computer chip it is expensive to duplicate, and I haven’t gone to the expense of doing so again after the first spare was lost on a snowboarding hill and the second simply disappeared somewhere in the house. As a result I never leave my car casually anymore, but stop to make sure I’m holding the key in my hand before I exit the vehicle. Even so, I still remember the horror of accidentally dropping my lone means of entry into the trunk one day just as the lid to the thing came slamming down. And many of us live restricted lives because we’re similarly afraid of somehow dropping the ball with God and hearing the Gates of Heaven slam shut against us forever as a result.

Yet God doesn’t want us to live our lives in fear. Knowing that we were without the means ourselves to purchase our passage into His Presence, He sent His Son to rescue us. Jesus was born in a barn in Bethlehem for the sole purpose of reopening the door of communication between fallen man and the God Who still desperately loved His creation, despite their rejection and sin. With His death He made restitution for us all and reconciliation a precious possibility as Heaven’s portals swung wide open once more.

From the night of His birth, while yet in His mother’s womb as she and Joseph arrived at a crowded inn, He’s been knocking on doors that are closed to Him, seeking a place to be born anew. If this Christmas you feel strangely moved, perhaps it’s because He has come to you with a simple message from your Father‘s heart: The door is open. The porch light is on. Hurry Home.