Tired and Tardy, Lazy and Late 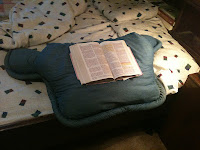 I looked up at the clock over the microwave, and gasped. Knowing I had to be at work by 11 a.m. that morning, I had timed the events of my day so that I’d be ready to leave home at exactly half past the ten o’clock hour. One by one I had ticked off the tasks on my list as I completed them until I stood ready to grab my purse and head out the door. One last look at the clock, and….what on earth had happened?! Somehow I had lost an hour! It was already 11:30, not 10:30, and I was headed to being a full sixty minutes late by the time I reached the time clock to punch in!

Quickly I grabbed my phone and called in. How on earth do you explain an hour’s tardiness when you have no explanation yourself?! No flat tire, no lost key, no excuse. I simply lost track of time. Thankfully my supervisor thought my horror over the situation was amusing, told me not to make a habit of it and to hurry in to work.

All day long I was amazed by my belated arrival, as I am rarely more than a minute or two late, at most. The bagger at the end of my checkout lane enjoyed it immensely, however, and teased me endlessly about losing my grip on life, this being the first evidence of the start of a downhill slide. I finally shook it off as just one of those things that happen from time to time…until I walked in the door the next morning (thankfully, on time!) and ran into my bagger buddy once more.

“Guess what happened to me today!” he said.

“Were you…an hour late?” I queried.

“Yes!” he answered again, and we both broke out into laughter over the absurdity of the situation. Like me, he had no real excuse, he simply overslept.

At least then I felt better about my own tardiness, understanding that God was using our tandem experiences to illustrate a point. Simply stated, it’s later than we think…for us as believers, for our coworkers in the Body of Christ, and most especially for the lost among us who need our witness and work in the ministry to lead them to a saving knowledge of Christ. And in God’s view of things, it’s no laughing matter.

A group of women in our church went away recently for a weekend of fellowship, shopping, and spiritual regrouping. They came home newly awakened to the call to pray, to seek God’s face, and to intercede for the Church, our fellow believers worldwide who are increasingly under attack. Resisting the urge to dally under the warm covers on cool autumn mornings now they instead get up and meet with their God, speaking His will and Word over the lives of their loved ones and canceling any plans the enemy may have against them with their active intercession. They reserve the first moments of the day for that which is most important, long before their schedules fill up and their energy runs out. “RIP those blankets off!” has become a spiritual battle cry that echoes from one corner of our sanctuary to another now on Sunday mornings as they meet, greet and encourage one another to remain faithful to the call.

It matters because we have an enemy who simply never takes a day off. He is ever on the job, looking for those whom he may devour (1 Peter 5:8) and seeking to steal, kill and destroy the lives of our loved ones and the lost among us. If people truly die at the rate of 2 lives per second, then each minute that we are “late” is costly indeed, especially for the unsaved, who will pay for our tardiness for eternity.

The situation was graphically illustrated the other night when a pack of coyotes attacked a neighbor’s dog. My husband listened in horror as the sounds of the fight came through the open bedroom window. The neighbor’s pet was clearly outnumbered and getting the worst of it; he wondered if it would survive the night. Quickly he got up to make sure our own animals were inside where it was safe. It brought back memories of  a night years ago when our own beloved golden retriever was wandering in the nighttime hours and met a similar fate. Thankfully he survived, but he was never quite the same after that attack.

Too many of us are living with a false sense of security, oblivious to the ploys of the enemy who waits till we’re not on the lookout to slip in his subtle temptations and lead us astray. Likewise we have loved ones who are wandering in the darkness of these times, oblivious to the danger that surrounds them. Perhaps if we had a better picture of the fate that awaits those who stumble into his clutches we would be similarly impelled to arise from our physical and spiritual slumber and begin to pray for their spiritual safety and security.

But God asks more of us than that we just pray for ourselves and the people we know. He, too, has loved ones that have yet to come safely Home, as well as those out searching for them who likewise need the protection of our prayer covering. And He’s looking for workers who will throw back their covers and rise to the challenge…while there’s still time.

Remember that it was while His disciples were sleeping instead of praying in the Garden of Gethsemane that God’s own Son was set upon by a pack of dogs. He allowed it to happen so that we would not have to suffer a similar fate. But perhaps that’s why God doesn’t find our tardiness amusing. The consequences affect more than a paycheck or a company‘s bottom line; the lives of people who are dear to Him hang in the balance. For the love of God, then, let’s rip off the life of ease that lulls us back to spiritual sleep, and get to work.

“When he came back to his disciples, he found them sound asleep. He said to Peter, ‘Can’t you stick it out with me a single hour? Stay alert; be in prayer so you don’t wander into temptation without even knowing you’re in danger. There is a part of you that is eager, ready for anything in God. But there’s another part that’s as lazy as an old dog sleeping by the fire.’” (Matthew 26:40-41 MSG)
Posted by Elaine L. Bridge at 11:19 AM