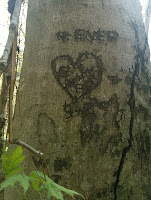 Sunny if windy, the gorgeous weather had called everyone outdoors on this early spring morning. Hoping to escape the ear-splitting pounding of a jackhammer in the hands of some workmen who were fixing a portion of the paved parking area, I hurried down the path that led to my favorite stretch of nearby woods. Usually one whose gaze is drawn to treetops, this trip I was looking for the early blooming wood violets that line the trail in bunches of purple glory. As I neared the end of my morning stroll, I was stopped by a strange and persistent cracking sound that I couldn’t identify.

At first I thought it was just more noise from the crew of park workers I’d left by my car. But the sound was closer than that, and different somehow, a steady snapping that held my interest and attention as I looked about me in bewilderment. As my gaze turned upwards for the first time that day, I looked uneasily at the swaying trees that were being blown about by the steady wind. My few years of experience as a field forester had instilled in me a healthy respect of this force in the sky that can topple weakened trees on anything moving about on the forest floor. I decided it was time to leave.

Just then the repeated sound caught my attention again, and when I looked to the right of the trail I suddenly found its source. A giant beech tree, probably hundreds of years old, had a huge split shooting up from the base, and I suddenly realized that the steady wind was bringing this forest giant down, one ominous crack at a time. That moved me down the trail in the hurry, as I had no desire to be hit by any debris falling from the sky.

But I didn’t go too far, and despite the warning bells going off in my brain I found myself drawn back by something else I saw on the tree trunk. Long ago somebody had carved a crude heart shape into the wood with now-indistinguishable initials inside. Amazingly visible above it, however, was the carved “4 EVER” declaration of never-ending love.

Other markings on the tree were now as blurry as the lovers’ initials, testifying to the many years of weathering and growth that had gradually erased the distinguishing features of the letters and pictures. The huge crack angled off to the right side of the tree, cutting through the other carvings, but somehow leaving the heart and its message surprisingly intact.

I wondered about the couple whose romance had been recorded in that wood. Where were they now, in location as well as love? Could they still be together after so many years? The fact that the crack had bypassed the physical symbol of their love made me hope that their relationship had endured, as well, despite the storms that had weathered it. Perhaps years of togetherness in sunshine and rain had changed them little by little, blending their unique personalities over time so that the lines that identified them as individuals became blurred, and their two separate lives eventually merged into one powerful picture of forever love.

Later in the week another picture of forever love came my way. As I handed an aged customer her change after processing her grocery purchases I happened to get a good look at her hand. Fingers that at one time were fleshy and plump had become thin sticks covered with crepe paper-thin skin. Knobby knuckles kept the wedding bands that were now too big on her withered digits from sliding off, but the rings spun around her fingers at will, the stone that once so proudly marked her engagement as often hanging upside down as it was upright and glinting in the light.

Forever love is not always pretty. Life frequently tumbles us upside down and spins us around on promises we made when all was fresh and new and easy. Sometimes all that holds our marriages together is the conviction that God will protect that which He brought together in the first place and the belief that He will use the very storms that threaten us to instead strengthen our resolve to work things out when our willingness to do so is weak.

Perhaps the couple whose romance was recorded in wood never got the chance to revisit the tree that told of their love for all to see. But I hope they did so on occasion in their memories, especially when times were tough in their relationship. Making a marriage work is much more difficult than simply drawing a picture on a tree, and both parties have to purpose to maintain the union if its to be preserved. Sometimes that simply doesn’t work out. But maybe mentally running their fingers over the fresh-cut ridges in the once-smooth bark would remind them of the permanence of the declaration, a carving that could never be erased. It could be that in doing so they found the courage and resolve they needed to refuse to let the vows they spoke on an eventual wedding day be just words that could be taken back at will.

As a former forester, I’m not a big fan of carving anything on the bark of a tree. But this one in particular got to me. It’s very likely that the couple in question is no longer even alive, and surely the tree that recorded their love will be on the ground soon, too. Yet even as the symbol was left intact by the destructive crack, I like to think that the love expressed in that heart was truly one that even death could not part.