Busted on the Bottom 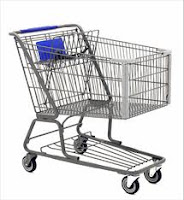 I failed a “mystery shop” on the job last week.

The company routinely sends “secret shoppers” throughout the store to ensure that all employees are doing their jobs in the prescribed manner, and as part of that procedure a shopper came through my checkout lane to have her order processed. Apparently I failed to ask a required question, offering my assistance with any items on the bottom of the bascart.

It wasn’t just a personal failure; it affected the score for the entire store. Although they were all very nice about it, several superiors, including the store manager herself, mentioned it to me. Conscientious though I am about asking the question, I clearly didn’t do so this one time that counted, and so had to sign a write up for the incident, indicating that I understood the requirement was that I ask the BOB question every time a shopper comes through my line. Simple though my job is, I enjoy it tremendously and it’s important to me that I do it well. I was crushed.

My boss had mentioned that I’d been working with a particular bagger at the time, one who is a special friend and with whom I’ve received great ratings in the past. When I told her later what had happened this time around, her eyes widened in surprise and she said, “I remember that order! Don’t you?! You said, ‘I forgot to ask that lady the bottom-of-the-bascart question. She’s probably the mystery shopper.’”!

Suddenly I did remember saying those very words, and could’ve kicked myself for speaking the situation out of my own mouth! Perhaps you’re thinking that the shopper in question would’ve been the examiner whether I’d verbally declared her to be so or not, and while that’s very likely the case, the irony of the situation made me laugh, which at least made me feel better about things as I went on with my day.

For some reason, failures are easier to bear when they have a lesson attached to them in some way, and I found that the value in this episode had nothing to do with the grocery store at all. It was the activity of my tongue which was in question. Words of wisdom found in Proverbs 18:21 came quickly to mind: “Death and life are in the power of the tongue…” Simply put, our words matter, and what we verbally declare over our loved ones, our lives, and ourselves affects our future more than we can possibly imagine.

Discouragement followed that thought, as I felt unable to watch every word that comes out of my mouth, so often do they come out almost without conscious thought. Clearly that is what God wants to change. Just as quickly did I realize that I am unable to right the situation on my own; He simply has to help me. I pray daily that God would place a guard over what comes out of my mouth; perhaps opening my eyes to the problem in such a creative way is the first step in that very process.

But it’s not always the words that come out of my mouth that are the problem; as in the shopping scenario described above, often it’s the words that don’t. There are many times apart from when I’m behind a cash register that I think of questions I should but don’t ask. For example, I sometimes avoid asking, “What’s going on?” to a person I’m afraid might just tell me when I’m short on time or interest. I might leave out the necessary, “Can I pray for you?” at the end of some such recitals, for fear of attracting too much attention or embarrassing the confidant. And my reluctance sometimes to ask, “Do you know Jesus?” makes me wonder at times if I really do, either. And yet I know that life is found in the power of the tongue that leads people into a relationship with God.

The paragraphs above were already typed into the computer when God penned a special postscript to them a few days later. Once again I was at work and had just thanked a family for shopping with us when I saw them head to the customer service desk instead of out the door. I hoped it was only my imagination when I heard my name mentioned, but my heart sank when I saw an assistant store manager approach my check lane a short time later to pull me aside and speak to me privately.

“A complaint has been filed against you,” he began, “but before we talk about it I just want to say thank you.” Thoroughly confused, I could only look at him for an explanation. Thankfully, this time I had remembered to ask the shoppers about the bottom of their cart (whew!), but the question had offended them. They thought I was insinuating that they were trying to steal something and wanted to assure the management that they’d never stolen anything before and didn’t plan to start now. Quickly it was explained to them that asking the question is company policy in an attempt to stem the flow of unpurchased stock left unnoticed on the bottom of the carts, a loss due more to simple employee inattention than suspected customer theft.

Similarly there are times when people will react negatively to questions God wants us to ask. Their response does not negate the need to ask the question; it only indicates a lack of understanding of God’s purposes and a misjudgment on the intent of His heart. He wants the door to communication with Him to be opened, whether the subjects choose to walk through it or slam it shut. My job is simply to open the conversation.

My bagger friend was bothered to find that the failure with the BOB question was still on my mind a few days after the fact. We both know that there will be many more mystery shops and ample opportunities to ask all the right questions. But that is not necessarily the case with people whom God brings across my path on a day-to-day basis. Only He knows what their future holds, what they might be contemplating or what might happen to them the minute they walk again out of my life. My silence in that scenario might have consequences far more serious than a simple write up in my file.

“ …‘My son, do not make light of the Lord’s discipline, and do not lose heart when he rebukes you, because the Lord disciplines those he loves, and he punishes everyone he accepts as a son.’”