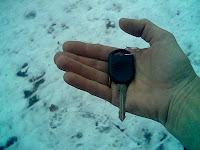 More than just the last line to a song I heard multiple times this past holiday season, those words describe a December hailed by the local news media as the third coldest/snowiest on record for our area. I didn’t need to hear it from the weatherman, however, to know it was true. And while I was at work one particularly bitter cold night, I felt winter’s icy blast each time the grocery store doors opened to let shivering customers in, some of whom were still shaking with cold and visibly chattering teeth when they left again a few minutes later.

I saw the frost heavy on my car even as I approached it at the end of my shift, and couldn’t wait to get inside and turn the heat on high. But I was stymied by a problem I’d never encountered before. I slid the key in the lock, but it refused to turn and open the I door! Fighting the overwhelming cold and my mounting confusion, I repeated the process again and again without any luck. The door lock was simply frozen shut.

My remote control had been lost in a sledding adventure a week or so earlier, so the only way to get inside the vehicle was by direct key entry on the driver’s side door. The trunk opened fine, and I briefly considered trying to wiggle through the crawl space between the trunk and back seat. A quick test showed that even that had to opened from the inside. It was time to holler for help.

Called for advice and assistance, my husband suggested heating the key with a lighter. A non-smoker myself, I hurried back into the store to purchase one and ran the flame over the key repeatedly before inserting it again into the lock. Despite repeated attempts, there was no change in my situation; I was still denied entry.

Surely there was some kind of door-lock de-icer on the shelves of the grocery store I’d just exited for the second time, but back inside once more I looked in vain for any such item. Out of luck and hope and very near tears, there was nothing else to do but call my husband for a ride home and wait there for the spring thaw. His favorite football team was in the fourth quarter of a playoff bid; the last thing he’d want to do is get in the car to come and get me. I clutched the key tightly in my right hand as I walked back to the car, holding the phone to my ear with my left. As I delivered the bad news I stuck it in the lock one final time, tried to turn it…and finally it moved! Holding the key in the palm of my hand must’ve warmed it sufficiently to unfreeze the lock when it was stuck in the slot. The button popped up, the door opened, and my long-suffering spouse was hard put to say which pleased him more, that his team had just won their game or that his rescue mission was cancelled. I hurried on home.

I’m reminded that we as people are locked out of a lot more than just cars. The world is a cold place in these days of economic struggle and emotional discouragement. We find ourselves unable to open doors that seem to be locked to employment we need, to relationships we long for with family members or would-be lovers, to success as defined in as many different ways as there are people to populate the planet. In our distress we look to external avenues of help…people we can lean on, products we can buy to assist us, or plans and advice from others outside the situation. Heaven knows we might even turn to prayer, hopefully as a first resort, but possibly even a last. And when we do so, perhaps it’s then we’ll realize as I eventually did that I really didn’t need to engage in any of the earlier options. The key to solving my problem was already in my hand. I just hadn’t yet realized that fact or the power it contained.

Our lives seem to run smoothly along on autopilot most of the time until we hit a roadblock of some kind, and in our distress we forget that in most cases we already possess what we need to succeed. The Bible is full of stories of the same. Again and again God solved the problems of His people by directing them to look at what they held in their hands. A quick review shows that He placed everything from ministry tools to miracles to the makings of the same within their grasp. And once their attention was focused in that direction, they found victory there also.

We can do the same. The next time we run into a door that won’t open we can take a minute to really evaluate the options before us and the giftings within us. Many times we’ll find that God has already given us a word on the situation that we haven’t acted upon, placed a talent within us that we haven’t yet developed, or given us the resources to meet a need in a form we hadn’t previously considered. Above all else we can rely on faith, hope, trust, and love - small words that move mountains so much more stubborn and frozen in place than any locking mechanism I might find on my car.

One final thought about the lock that wouldn’t budge. When I first inserted the key into the slot and found that it wouldn’t move, I couldn’t remember which way it was supposed to turn. I was afraid to force it in either direction for fear the key would snap, just like my emotions were about to. Likewise in life when we’re confused about which way to go and are reluctant to move at all for fear of worsening the situation, perhaps what we need most is to remember that we’re held in the palm of God’s hand, and looking to Him for help is always a turn in the right direction.

“For he is our God, and we are the people of his pasture, and the sheep of his hand. O that today you would hearken to his voice!”