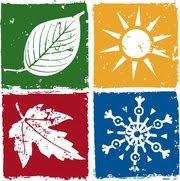 The food pantry patrons filed into the church sanctuary and settled into chairs to wait for their turn to shop the shelves in the basement below. As their initial greetings and early morning conversations died down, the music coming from the small radio in the corner was finally audible. Soon it was lost again in the loud protests coming from the workers and the waiting alike.

“Christmas music? Really?” Most of us agreed it seemed out of place to hear carols on the day before children dress as ghosts and goblins and grab candy from outstretched hands.

I understand the motive behind the retail industry’s desire to jump into the each holiday merchandising program months before the season itself actually arrives. But in many of us there’s something that cringes at the sight of Christmas displays on shelves that seemed to hold school supplies just a day or two earlier! And I still recall the horror of walking into a store on New Year’s Day only to find Cadbury Easter Eggs for sale by the registers! I hadn’t yet watched the Super Bowl, received a Valentine, or dressed in green on March seventeenth, and yet the Easter bunny was already hopping in my direction! And on the particular fall day described above I felt sure I wasn’t going to get a minute to enjoy my pumpkin pie before being passed a plate of fruitcake!

I’m not a grinch. Born on December 25th, I’m a lover of all things Christmas. You might think it’s because I associate the yuletide season with aging that I’m not in a hurry to rush into the holidays each year. But I think there’s more to it than that.

Despite what we do with our holiday celebrations, we can’t rush the physical seasons of the year. Flowers and shrubs bloom in sequence as we flip the calendar pages, and all the wishing in the world won’t change the order of their appearance or speed the opening of their petals. Perhaps God planned it that way to teach us to drink every drop from the cup of the current season, be it bitter or sweet, before tasting what the next has to offer. Some stages of life are so enjoyable that we are reluctant to leave them, but perhaps it’s the boundaries on either end of them that make them precious, the knowledge that change is inevitable and our todays have to be embraced before they’re swallowed by our tomorrows and lost to us except in our memories. And yet it’s those same boundaries that make difficult days bearable, the knowledge that there will be an end to them as we pass through a particularly dark period into brighter days soon to come.

In the instant gratification of today’s society we have lost something valuable – the wonder of waiting. Due to technological advancements and the fast pace of life today we are intolerant of delay of any type, be it on the highway, the internet, the news, or the speed at which our food is prepared. Yet even fast food comes at a price that can’t be measured in dollars and cents. There’s something to be said for a meal prepared in a slow cooker that fills the house with its aroma and the family with anticipation as it simmers slowly away throughout the day.

Similarly, part of the joy of every holiday is the waiting period for it beforehand, remembering the fun of seasons past as we look ahead with excitement to what lies ahead. In fact, the Advent season itself is a time of waiting and preparation for the arrival of the promised Christ child, not just physically in a manger in Bethlehem long ago, but born anew in our hearts today, as well.

A tour through the produce section of the local grocery store proves that we don’t even want to wait for our fruit to ripen! Due to advancements in science and the speed at which goods are transported today, items which used to be available in only certain months are now available year round, simply flown in from other hemispheres where foods ripen at different times of the year.

At first delighted, my enthusiasm soon waned. The grapefruit I ate with joy in December I was tired of by March and April. When lured by their brilliant orange color into buying Minneola tangelos for sale in summer that I usually expect to eat only in late winter, I found that they just didn’t taste the same. Something was missing. I found that I’d lost the anticipation of their arrival. The same thing happens with the holidays we celebrate, when we remove seasonal boundaries and try to enjoy them all at the same time.

So how do we get that anticipation back? Personally, I’m putting myself back on schedule, waiting to enjoy seasonal foods in the months they normally appear here as a reminder to put all the energy and enjoyment I can muster into my current season while I wait with excitement for the joy of whatever lies just ahead.

As for Christmas? Everybody celebrates the holidays in their own particular way, and that’s fine. But you can bet I’m going to set my Thanksgiving drumstick down before I invite the Little Drummer Boy to pick his up and begin to play.

“To every thing there is a season, and a time to every purpose under the heaven…”