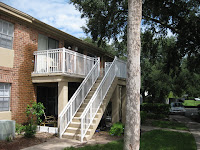 Slowly I inched the truck backwards, my eyes glued on my son’s beckoning arm in the massive side mirror until he raised his hands, signaling me to stop. Turning off the ignition, I breathed a huge sigh of relief. We’d made it!

I had doubted my ability to drive the rental rig with the ten-foot bed from the get-go. Despite my husband’s assurances that it would drive easily, it’s mere size intimidated me, and it was only the need to get Kevin’s newly-bought furniture from the store to his apartment that caused me to agree to the idea in the first place. But when the customer service lady behind the counter told me that she was going to give me a twenty-foot truck for the same price because the smaller vehicle had mechanical problems, my Goliath suddenly grew another ten feet, and I quailed at the sight of the idling monster. Only the steady stream of encouragement pouring forth out of the mouth of the son standing beside me convinced me to open the cab and climb aboard the waiting vehicle. “You can do this, Mom.” “Piece of cake.” “Only a couple of turns and we’re there.”

Knowing that he could’ve driven the truck with his eyes closed, I mentally blasted the driver age restriction on rented vehicles, slid behind the wheel and set off. Minutes later, having mercifully run over only curbs and not people, I pulled into the apartment complex and backed the rig into position for unloading.

While I breathed sighs of relief and voiced my thanks to God for getting us there, Kevin looked at the dripping skies and knew our real problems were only just beginning. He could easily muscle most of the contents of the truck up the stairs and into the apartment single-handedly. Only the queen-size sleeper sofa, a notoriously heavy article of furniture, would pose a problem. Earlier we had joked about bribing some passing college student into helping us by flashing a few greenbacks, but with the steadily falling rain there were few people out and about. I assured Kevin that together we could get it up the stairs, even if we had to heave it up one step at a time. But the muscle-bound Popeye beside me took one look at my Olive-Oyl-like arms and knew we needed more help than a positive attitude and a couple of cans of spinach could provide. He quietly asked God to send us some assistance, then lifted the door at the back of the truck and began the unloading.

Minutes later his help arrived. An elderly Hispanic man who lived in the apartment below came walking through the nearby pool area, saw the open truck, and immediately shouldered an end of the sofa, ready to help hustle it up the stairs. Soon it was manhandled through the apartment door and settled on the living room floor. Our attempts to then communicate our thanks were laughable. The man spoke no English and we knew no Spanish, so smiles and handshakes had to suffice. Later in the day we saw him again, and he came over to the car to try to talk to us once more. Sadly, no amount of goodwill or hand gestures could get us past the language barrier, and with a few shoulder shrugs, shakes of the head and more smiles, we parted once more.

Somehow, however, he managed to get a message across. I saw it first in the actions of my son. Together we had been consumed with the need to get his apartment furnished and himself situated before I left for home in just a couple of days. Each day we had a multitude of tasks that needed to be completed, and we dedicated ourselves to accomplishing them. But after our encounter with his neighbor, my son’s focus suddenly changed from our own to-do lists to looking for other people to help! College kids were moving into apartment complexes all around us, and every time he saw a U-haul truck or a pick-up loaded with furniture, he looked to see if the rear door panel was up or a tailgate was down, indicating that somebody might be in need of the same help we’d just received.

Shouldn’t we be living the same way? A toothless old man with leathery skin browned by years in the Florida sun reminded me with his actions that Christ came to shoulder a burden that wasn’t his own and get us to a place we couldn’t get to alone. And all He asks is that now we do the same for someone else. Too often we let our inability to relate to others and the life situations they may be going through to stop us from reaching out to lend a helping hand. But a lifestyle of service to others speaks a message that hearts understand when our words fail to communicate our thoughts.

It’s not like God asks us to do it alone. The Holy Spirit is our constant companion, empowering us when we’re scared and weak with words of hope and encouragement, constantly leading and guiding us with His direction and counsel.

On the last day of my stay in Florida, my son and I high-fived when the last of our tasks was completed. All we had left to do was pass a few hours until it was time to head to the airport so I could catch my flight home.

Spiritually speaking, too many of us are doing exactly the same thing. Instead of killing time let’s use the time we have left to help others, knowing that every step we take to lift another up leads both of us closer to Home.