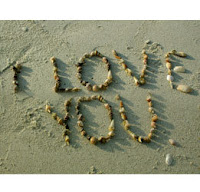 I’d been following its progress for months. My friend had faithfully relayed to me the latest details of her blossoming romance after each visit with her new boyfriend. Successive dates revealed new aspects of his personality that delighted her and she found herself liking him more and more. In our last conversation she whispered that she was beginning to realize that she loved him… and was now in a quandary as to whether or not to tell him so. I was somewhat surprised at her reluctance to voice her feelings.

“I’ve never said it first,” she said in explanation. In all her previous relationships it was always the guy who first declared his love. I understood without her saying so that there was a lot at risk. Sure of her feelings, she was less so of his. Perhaps such an honest expression would scare him away, indicating a depth of feeling that he might not share. There was the possibility that after having laid her heart bare she would once again find herself wounded and alone. “Once burned, twice shy,” as the old proverb goes, suggesting that it might be wiser to keep one’s feelings under wraps and let the other person take the plunge.

To me it was obvious that he was in love with her, too. Throughout the course of their relationship he had been careful almost to a fault not to do or say anything that might jeopardize their relationship. Yet he clearly was facing the same fear. I urged her to say what she was feeling, but at the right moment and in a place where she could see his face in response. I was sure she’d be pleased with what she’d see.

A few days later I was shopping when I came across a bracelet that caught my eye. A simple silver heart was strung between a couple of small beads on two elastic bands that met and tied in a knot in the back. A sucker for hearts anywhere I see them, I soon walked out of the store with the bracelet in a bag.

As I looked at it often on my arm that afternoon I began to ask myself what it meant to me, as I knew it was more than just a pretty bangle. Perhaps it was nothing but a simple reminder that Jesus loves me. If so, I can never have too many of those. Or maybe it would prompt thoughts about loving God by loving His people, as well. Maybe the fact that I wore it with the heart pointed outwards was symbolic of the need to give His love away. But some time later it came to me that God was simply telling me to wear my heart on my sleeve… to risk love, and to love genuinely and openly, without concern about how that love is received.

Perhaps we are reluctant to do so because loving in such a manner makes us vulnerable to hurt or heartache. It means pulling our hearts from the layers of protection we’ve placed around them and putting them out there where they can easily be broken by the careless or deliberate actions of others. But there’s a reason that God would have us to do so, and that is that it makes His love visible to those who may have been looking for it all their lives. And in so doing we make ourselves available to be His instruments of help or healing in whatever situations they may be going through, to point them to the One whose love never fails and who has all the answers to the questions they ask.

At the store that day I tried on all the bracelets on the rack before eventually purchasing the one I did. I wanted to be sure I bought the one that was the right size and the right color for me. Similarly there’s no one way to wear love or to love other people. Each of us will express God’s love differently, but the important thing is that we do. And when you find that right moment to say what’s on God’s heart to someone in need, you’ll find that you’re finally in a place where you can see His face…and you can be sure you’re going to like what you see.