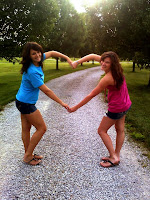 "We need your list," I said to my husband as Father's Day approached, hoping he'd do his duty of providing a wish-list of gift ideas for his sons to choose from while they still had a little cash in their pockets to spend. His response surprised me, however, as it turned out he was more interested in the time on their hands than the bills in their wallets. He gave them a list of chores he needed done so he could take the weekend off.

As Father's Day rolls around again perhaps you, like me, spend time thinking about your spiritual Father and wondering what you could do to make this earthly holiday a happy one for Him, as well. It turns out that He, too, has a list for each of us, not of items to buy nor tasks to be completed...but simply of people to love.

A list of people to love. The thought stayed with me as my husband and I browsed through the mall the other day and I came across a wall clock that had slots at each hour position for a picture insert. Set out on the clearance table and marked down to half price, it was a good buy as a possible gift idea for someone. I picked it up in passing, as I still needed a Father's Day gift idea for Jim's dad, but set it down again quickly as I laughingly remembered that I have absolutely drowned this poor man in pictures of his grandkids since they first arrived on the scene. Each year the Hallmark store seems to come up with a new way to display their images, from coasters with photo inserts to wooden ladders with frames hung between each rung. I've bought and gited him with them all. I set the clock back on the table and moved on.

But good fathers have a passion for their progeny and delight in seeing their faces about them. God is no exception. He took me back in thought to that clock this morning and reminded me that time is ticking away, and that He has children who are still lost, faces that are dear to Him that are not yet in His fold. He's given me a list of people to love into His Kingdom, and surely He must wonder what I'm doing with it.

Unrelenting in His urgency to get this message across to me, He found me browsing on Facebook a little while later, reading random posts from people about what they were doing and what their friends had to say about it. As I scrolled down the page, my attention was caught by a photo of two young women who were smiling at a camera, their hands clasped and arms arranged in such a way that they formed a perfect heart shape between them.

I stopped and smiled, fascinated at the love between them that was captured so perfectly for all to see. Although I didn't know the girls in the shot, the picture pulled me in and absolutely captivated me. I tried to scroll on down the page, but I found myself returning to the photo again and again. Finally I hit the print button and filed the resultant paper with the photo on it in a folder until I understood why God was drawing me to is so strongly.

Today I get it. It's not really a picture of two people at all, but of God. Despite mankind's begging through ages past, nobody has actually seen God, although Moses was once given a glimpse of His backside when He passed by. And yet God's answered our plea repeatedly, if we only had eyes to see His face in the love we have for each other. The Bible says that God is love (1 John 4:8). When we love one another, He suddenly becomes visible, and then those who have yet to experience that love can be drawn into a love relationship with Him of their own.

A list of people to love. Each of us has been given one, people that God has or will put in our path for the purpose of making Him known. It might be a long-standing relationship or an encounter so brief that you don't even have a chance to catch the other person's name. But God knows it, and He is blessed any time we put His desires above our own priorities in life and spend a little time loving on His kids in some way, be it with a smile and a kind word, a hug, a moment of prayer, or another activity of some kind.

The latter is important because love is more than a feeling. It has to be expressed in some way, as it was symbolically in that photo. What makes God visible is when we go to the effort of reaching out, grabbing the other person by some action on our part and drawing them into a heart-shaped relationship of some kind that has God at its core. That's easy to do with those who are easy to love, but so much more powerful (and visible) when we reach out to those who aren't...when the effort costs us something in terms of pride, patience, pain or time...when it's a sacrifice in some way. The the effort becomes visible to God, and suddenly it's a picture that He can't get past, but goes to again and again with a smile in His eyes and joy in His heart.

Talk about making your Father's day.