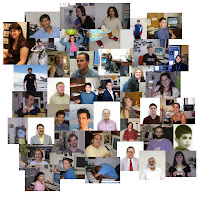 My first visit to the woods for the year was a time of great rejoicing, so ready was I to be done with winter and celebrate the warmer months of the year once more. With one of the snowiest Februarys on record now behind me, my trip had a purpose beyond merely searching for violets in bloom and wandering the woodland trails once more. I had come specifically to return my leaf to God.

As the trees were shedding their foliage last fall, making a golden carpet beneath my feet, I was mourning the end of pleasant weather and dreading the onset of the snowy season of the year. That morning God dropped a leaf from a nearby tree directly into my hands, whispering His promise that He would always be near me in the dark times of my life and to carry this simple token of His presence with me through the dreary winter days to come, marking their eventual end by returning it to Him once I'd made it through another winter and was celebrating that fact once more (see Woodland Wonder). And so, folded inside a slip of wax paper, it traveled with me though the pages of my journal as I documented the details of God's presence in my days. Now I was ready to welcome spring by bringing it back at last.

The leaf seemed as excited as I was, anxious to break free, the springtime breezes threatening to blow it away before I could lay it down at God's feet. Once done, however, the action made me wonder what other things God had given me that He perhaps desired me to return to Him. Love, for sure. Talents and giftings, most definitely. Time. Money. Fellowship. I rapidly scribbled the list in my journal as the ideas came to me, finally setting it aside when the flow stopped, knowing it to be still somehow incomplete.

Hungry for some "alone" time, I was distracted by the noise around me, my usual sanctuary a busy place that morning as fishermen returned in droves to the banks of the lake I sat beside, drawn as I was by warm temperatures and brilliant sunshine. Too near me to be ignored, a group of them discussed in loud detail everything from what fish were biting to which bait was best to where to find a cheap motorboat to what one might cost. Just as their conversation ended when the group with the boat finally put out from shore, another man accosted me, asking if I'd seen anybody resembling his fishing buddies, whom he then described in great detail. I looked up from my again interrupted quiet time in some irritation, yet tried hard to listen to him. I think I may even have smiled. But inside I was a seething bundle of nerves, all of which were trembling with the desire to scream at them all to please just leave me be!

Desperate for some solitude, I got up to go for a walk in the woods. I rejoiced in the early wildflowers and the sight of a passing butterfly, when particular birdcall near me caused me to wonder if the majestic pileated woodpecker was nearby. Just as that thought occurred to me, one did fly by, passing incredibly close to me before landing on a nearby tree. Fascinated, I stopped and watched him work his way up towards the sky, his brilliant red crest visible fist on one side of the trunk, then the other, until he was high in the treetop. Suddenly startled, he flew to another tree nearby and then deep into the woods where he was quickly out of sight. That's when I saw a couple heading towards me on the path. Although we greeted each other in a friendly enough manner, it was clear that each of us was a little peeved with the other, silently blaming them for scaring away the bird we'd both been watching as we continued hiking in opposite directions down the trail. I laughed to myself that people were clearly posing a problem for me that day, anxious as I was to simply get away from them all and concentrate on God.

And that's when it hit me that it was the people I'd been so busy running away from all morning that I was actually there to see! "People" was the missing entry on my list of things to be returned to God!

Fascinated, I turned the thought over in my mind a little more. Jesus had seemed to be as desperate for some "alone" time as I was. Over and over in the Bible he withdrew from the crowds to a solitary place (Matthew 14:13) or headed up into the hills to pray (Matthew 14:23). And yet again and again He was interrupted by people coming to Him for help with their needs. But Jesus never looked at dealing with people as a problem. Rather, spending time with them was simply the joy of his life, the passion of His heart, His sole (soul!) reason for coming in the first place. He simply loved them and wanted to be with them, both now and forever.

Perhaps the singular purpose of His attempted "alone" times was to give Him the resources He needed to deal with them more effectively. In one of His last times with His disciples before His arrest and eventual death, He talked to His Father about this mission he was about to complete, saying that He had made the Father known to the people God had given to Him, and that none had been lost except the "one doomed to destruction so that Scripture would be fulfilled" (John 17:12 NIV). In short, He was returning a full roster to the One Who had sent Him to rescue mankind from their sin.

We've been given a similar agenda. God has surrounded each of us with people - family, friends, neighbors and coworkers...even total strangers who cross our paths seemingly by chance, but who are actually strategically placed by God to be ministered to in some way by contact with us. Our alone times are meant not to escape from these people but to equip us to help them in whatever ways we can, to make the Father known to them and introduce them to a relationship with His Son, that they might one day be returned to Him and live in eternal glory.

While we can't make their choices for them, we are able to have a positive impact on their lives during our short stay on this planet. And if for whatever reasons we're finding that difficult to do, we truly need to ask God to touch us anew with His love for the people He sends our way every day.