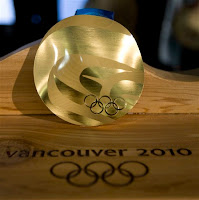 The XXI Winter Olympic Games held many of us as spellbound as this just-ended February kept us snowbound indoors, watching the sports coverage on our TVs. Truly the American athletes performed magnificently, launching the United States to the top of the leader board in the medal count, standing on various levels of the medal podiums again and again. It became our habit to check the paper or the internet first thing each day to see where we stood in the medal race and if we'd added to our count in any of the events of the previous day.

The medal ceremonies themselves were likewise a favorite part of the television coverage. No matter what country stood on the top spot, we were drawn to our sets to look into the gold medal athlete's eyes as each watched their flag being raised and heard their nation's anthem played on their behalf. We wondered what this moment could possibly feel like, the culmination of years and years of effort, hard work and training.

We know, of course, that there's so much more to the Olympics than just the medals. Despite the "U-S-A! U-S-A!" chant that pounds incessantly in the back of our brains, we hear the old adage it's not whether you win or lose, but how you play the game sounding in our hearts. Those words of wisdom tend to get lost, however, in the pressure to perform for our national pride and in the lure of monetary compensation from commercial endorsements that are at stake.

But every now and then an athlete comes along who gets our thinking back on track. Such was surely the case when Johannie Rochette skated her short program in the ladies figure skating competition just two days after her mother's sudden death. Surely at that moment there was nothing she felt less like doing than putting on her costume, lacing up her skates and pasting a smile on her pretty face for a watching world. The Olympics at that point mattered far less to her than mourning the loss of this woman who had so selflessly loved her, consistently cheered for her and faithfully financed her efforts through the years to make this very moment possible. And yet she did it simply because she knew her mother would be watching from somewhere up above, expecting her to take to the Olympic ice and skate the performance of her life...to simply give it her all despite the circumstances surrounding her...to give the world a glimpse of the champion she knew her to be on the inside.

We likewise have a Loved One in Heaven who sacrificed everything that we might also have a shot at glory...eternal glory. He watches us now as we head to jobs instead of a skating rink, deal with relationships in our homes and offices instead of in an Olympic Village, and are guided by the advice of our counselors, pastors and parents instead of that of coaches and trainers. And every day we face the choice of taking to our own piece of ice, wherever it may be, and giving the task at hand our all, regardless of the possible outcome or the situations opposing us, offering the world a glimpse of the overcomers God has called us to be.

Johannie Rochette did just that the night of her short program, bravely stepping out onto the ice and skating the performance of her life, only breaking down at the end when she was through. And although the competition was only halfway completed, the television coverage ended that night with yet another award ceremony, one in which no medals were given, but instead praise, cheers and tears, as the world cried along with her.

While two days later Johannie finished the competition in third place with a bronze medal hung around her neck, clearly no athlete performed with more heart, even when her own was breaking. May her performance inspire us to pursue our passions with similar Olympian effort, knowing that whatever the outcome of our endeavors or any accolades we may receive, we likewise performed with a heart of gold.