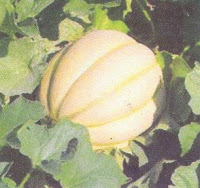 Seven of us sat around a table in the church office, meeting to make plans for the upcoming holiday toy drive for needy kids in the area. In the small talk of the opening minutes the pastor’s wife and I were discussing God’s presence in everything around us. The jokester in the group, a man named Steve, queried, “How about in… a cantaloupe?!” We all laughed and then got down to the business at hand.

The Bible says that where two or three are gathered, God is there in the midst of them (Matthew 18:20). Indeed, it seemed to be the case that day that He was there, listening and ready to take on the task of making His existence in a cantaloupe known. In fact, we had been laughing earlier about Jesus literally being in the room with us, as a friend of Steve’s had accompanied him to the meeting and was dozing on a nearby couch. With his shoulder-length dark hair he looked remarkably like the images of Jesus we’ve seen in Bible portraits, movies and the like. Several of those who attended the meeting did a double take when they first came through the door and saw him sitting there, as the resemblance so easily came to mind.

Surprisingly, melons have been much on my mind of late. At the end of August the produce sections of local grocery stores as well as the vegetable stands we see along our highways this time of year are flooded with Indiana melons, a variety of cantaloupe that is exceptionally sweet and juicy. Or so I hear. I’ve been amazed at the customers that have come through my checkout line at the grocery store of late that have raved about it, often purchasing one and then coming back for four or five more because the first one was so good. All the talk finally piqued my interest, and noting that my husband likes sliced cantaloupe for breakfast, I decided to buy one and give it a try.

There is a science associated with picking a ripe Indiana melon, and after the fact I learned that listening for a hollow sound when knocking on the husk is not one of the approved selection methods. Chief on the list is the smell that emanates from the fruit. With a sigh I realized that this presented a problem. My sense of smell all but vanished when I was in high school, never to return. I can smell bleach and skunks and very little else. Undeterred, I continued my research and found that the other trick is to gently press the end opposite the stem, which should give lightly. Neither of these were criteria I checked before making my selection.

And so it turned out that I picked a bad one that was dry and tasteless. Disgusted, I cut up a few slices for economy’s sake and then threw the rest away, done shopping for melons for the year. My husband, however, doesn’t give up so easily. He, too, had been hearing his coworkers rave about melon heaven, and he encouraged me to stop at a roadside stand and try again. To his frustration I kept forgetting to do so, but after the subject came up in our morning meeting it was still on my mind as I drove home and I stopped at a stand minutes later. Apparently the demand is so great at the moment that even the farmers can’t keep them in stock. This one was sold out for the day at just noon. I vowed to stop again (earlier!) on another day and went on my way.

This morning I was drinking coffee on my deck when out of the blue God brought the melon subject back up, comparing the orange wonders inside the husk to the Word of God. At some point in most of our lives, whether it was because of some talk we heard about it or at the urging of a loved one, we opened the Bible and sampled the wares inside. Novice readers of God’s Book are much like me, shopping for a melon with no clue as to how to find a good one. We pick out a chapter and sample it, and if it’s not to our taste we put it aside and never pick the book up again. Admittedly there are some chapters of God’s Word that are a little dry and that don’t seem to apply very effectively to our daily lives. Yet a purpose of even those paragraphs exists, one we will eventually discover if we prove persistent in our pursuit of an answer.

But that’s the point. Too often we give up and put the volume away after our first taste, and in so doing we miss the sweet juiciness of another slice from a different chapter that might apply directly to some situation that we are going through. Just as there are ways to pick a ripe melon, there are right ways to start a Bible reading program. The first step is to pick a translation that is appealing rather than intimidating; a version that is easy to read and written in language that is easy to understand. It is also important to ask God to reveal Himself to us as we go, especially if we’re struggling to see Him in what we‘re reading. And then we need to press in regularly, and not quit! The goodness of God as revealed in His Word will then truly keep us coming back again and again for bite after delicious bite.

August ends all too quickly for cantaloupe aficionados. Thankfully the Word of God never goes out of season and is available for consumption year round. But don’t take my word for it. Like my friend Steve, issue a challenge to God and don’t be surprised if He shows up in the very place you’d least expect with a spiritual taste sensation that you will never forget.