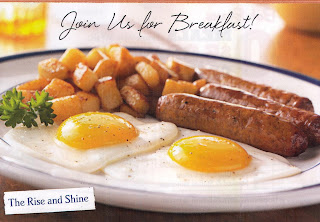 Anybody who knows me knows that I love to eat breakfast out. There's something about heading to a restaurant for a morning meal that transforms an ordinary day into something special. And likewise they know that while I'll eat breakfast anywhere, my morning restaurant of choice is Bob Evans. My mother-in-law and I decided once that our preference for that spot was due to the abundance of smiles that always greats our entrance there. And finally, they know that I don't need to look at the menu, because rare is the day that I order anything but the "Rise and Shine" - two eggs cooked the way you like them, with hash browns and a choice of meat and bread. Add a couple of cups of coffee and a day just doesn't get started any better than that.

No wonder the menu asserts that the selection is their most popular breakfast pick! Even the paper placemats on the table advertise that option, combining it with a picture of a sunrise over lush, fertile farmland, as if to suggest that surely this is what "breaking a fast" - even if it was just overnight - was meant to be.

Apparently one day recently my mind was too rooted in my carnal love of food to hear what God was trying to say to me, distracted as I was by the smell of fresh coffee and bacon on the grill. So He abruptly switched tactics, accompanying me on a later shopping trip to a discount store and showing up big time on a line of brightly colored summer clothing I was walking by. As He knew it would, my eye went straight to a turquoise-colored t-shirt, across the front of which was written... Rise and Shine!!! I stopped and fingered the fabric, wondering suddenly if there was more to my life experience in those three words than mere calories. Were they more than just a menu option, perhaps? Could they possibly be a command from God?

Rise and Shine. Maybe God is saying it's time...time to do more than just go about our days eating, sleeping, earning a living...biding our time till the end of time. Perhaps He is summoning His troops for a last big push against the enemy's agenda in these, the last days. Rise and Shine would instead then be a call to service, a reverie to rouse a sleeping army, sending us to the battlefield. Perhaps it's an impassioned plea to put the gifts and callings He's placed on our lives to work for His purposes before time is no more. For soon there will be no more time for those friends, family members and even total strangers around us who don't know the Lord. Now is the time to make their salvation secure.

Apparently Jesus had a fondness for breakfast out, as well. One of my favorite Bible stories is the one that finds the disciples back in their fishing boats after Jesus' death and resurrection. Hailed by a voice on the shore asking if they'd caught anything, they replied in the negative. When instructed to cast their nets on the other side of the boat they pulled in a catch that their boats could barely hold. Suddenly their eyes were opened and they recognized Jesus as the one speaking to them from the shoreline where He was cooking a meal of fish over a campfire. He invited them to bring over some of their morning haul. Now if anything could beat breakfast at Bob Evans, it would be a morning meal of fresh-caught fish cooked over a campfire by Jesus. Talk about good food and good company! It sounds a little like Heaven on earth to me!

It turned out to be God's version of the Rise and Shine. After inviting His disciples to sit down and eat, He reinstated Peter and sent Him back to the battlefield, instructing him to feed and care for His followers.

Could it be that now He's saying the same to us? Morning by morning He meets with us and feeds us from His Word. Then He sends us out to face the day and fight the enemy on His behalf, winning souls for the Kingdom and nurturing the sheep that are already in the fold. Most of us know that we are called and commissioned to a work for the Lord. But for many of us it's something that we'll get to someday in the future. And perhaps God is telling us that our "somedays" are suddenly upon us, that now is the "appointed time" (Habakkuk 2:3 NIV) to truly rise and shine.